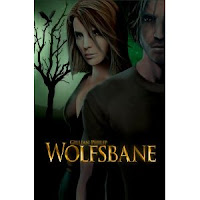 Grim But Great
review by Maryom

While we were on holiday in Scotland, we received a text message from Wolfsbane's publisher suggesting we might like to drop into Glasgow and pick up a copy hot from the press. Much as we would have loved to, we were 100 miles away and travelling in the wrong direction! Fortunately we organised a meet up for the following week at Edinburgh International Book Festival where we were passed an early copy in a plain brown envelope. I'd thought of going back to the beginning with Frost Child and reading all the Rebel Angels stories in order, but, with Wolfsbane in my hands, I couldn't wait to plunge into it.

Time has moved on in the world of the Sithe since the events of Bloodstone and Rory, then a small child, is now a teenager, fed up with the restrictions imposed on him by his father Seth - even if, or maybe especially when, those restrictions are for his own good. Seth, rather surprisingly, has grown up too. Pain, loss and fatherhood have all their marks and he's now more caring, less headstrong and, I thought, more likeable.
With no Sithe of his own age for companions, Rory finds his amusement in ripping his way through the Veil into the world of Mortals.There he meets Hannah, a girl with family troubles of a different kind and he persuades her into crossing through the Veil. Hannah immediately feels 'at home' there but the Sithe world is not an untroubled peaceful one. After years of stalemate, the war between Seth and Queen Kate NicNiven is hotting up and Rory and Hannah find themselves being dragged in.

I always have a little fear mixed in with anticipation when I pick up a much-awaited novel. After the events of Bloodstone, I wondered where Gillian Philip was going to take the story next and how she could keep up the emotional intensity of the last book without merely repeating herself. Well, however she manages to do it, Philip has come up with another stunner that lived up to all my expectations. In case you haven't read any of the series so far - don't make the mistake of thinking the Sithe are happy, cute fairies -they're rough, tough and at times plain evil. There's lots of swashbuckling adventure and more romance this time round but Ms Philip doesn't believe in easy, happy fairy-tales. I sometimes wonder how much turmoil, torment and sheer unadulterated pain Philip can inflict on her characters. Physically and emotionally they have to work hard for their part in the story!

It's a harrowing, at times stomach-churning, draining read because Philip creates characters that the reader believes in and cares about - but one that left me feeling I'd read something really special.

Adults - although this is billed as YA fantasy, don't let the teens keep it for themselves.

from Amazon
Posted by maryom at 09:30