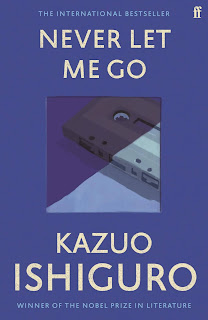 Kathy, Ruth and Tommy were all students at the rather 'select' Hailsham school. Raised there from early childhood, their lives were free from outside influences and stress; in many ways it was an idyllic time. Now in her early thirties, Kathy reminisces about their years together, at Hailsham and afterwards, and the gradual realisation that their lives, and deaths, have been planned out for them.

This must be the fourth or fifth time I've read Never Let Me Go and it never fails to pull me in, to enfold me in its parallel world; one which seems so normal on the surface but is dark and dystopian underneath.

At different times, it strikes me in different ways. Sometimes it's a coming of age tale, A fairly normal one of childhood tiffs and squabbles, of 'queen bee' Ruth who must be humoured else she'll make everyone's lives a misery, of the obvious differences of being brought up in an institution, even if it's one as supportive as Hailsham, Sometimes, it's far more sinister - a chilling tale of  human clones being bred to become organ donors. Or it can be nostalgic for the past, in which Hailsham represents a more caring world which no longer exists.

However it strikes me, Kathy's narrative plays out carefully, hinting at, but never outright declaring, the fate which awaits her, Ruth, Tommy and their classmates. Expressions such as 'donations' or 'completion' are bandied about as if both the children and the reader know what they fully entail; then the full enormity is revealed, and it's not quite a surprise, just a dreadful acknowledgement of what we'd suspected, but ignored, all along. That implicit acceptance leads to a far more chilling ending than if Kathy had raged against her circumstances throughout.