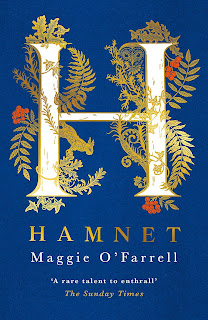 TWO EXTRAORDINARY PEOPLE. A LOVE THAT DRAWS THEM TOGETHER. A LOSS THAT THREATENS TO TEAR THEM APART.


On a summer's day in 1596, a young girl in Stratford-upon-Avon takes to her bed with a fever. Her twin brother, Hamnet, searches everywhere for help. Why is nobody at home?
Their mother, Agnes, is over a mile away, in the garden where she grows medicinal herbs. Their father is working in London. Neither parent knows that one of the children will not survive the week.
Hamnet is a novel inspired by the son of a famous playwright. It is a story of the bond between twins, and of a marriage pushed to the brink by grief. It is also the story of a kestrel and its mistress; flea that boards a ship in Alexandria; and a glovemaker's son who flouts convention in pursuit of the woman he loves. Above all, it is a tender and unforgettable reimagining of a boy whose life has been all but forgotten, but whose name was given to one of the most celebrated plays ever written.

William Shakespeare has to be England's best known playwright - four hundred years later his plays are still performed regularly, and he's there in every other English and drama lesson at school. Probably few of us know anything about the man himself though, his private life, and the loss which (some scholars say) lies behind his finest play Hamlet. This is where Maggie O'Farrell's first venture into historical fiction takes us - into the annex, next to his parents' house where Will and Agnes live (though he spends most of his time in London) with their son and two daughters, and where tragedy is waiting to strike.

This latest work of Maggie O'Farrell's brings all the empathy and understanding that I've found in her previous work and applies them to the Shakespeare family. As the hours tick down, as Judith takes to her bed feeling ill, and her brother Hamnet desperately tries to find his mother, another thread moves back to the first meeting of Will and Agnes, their passionate love affair and rather pressing marriage, and the bond which has kept them together even though Will has fallen in love again - this time with the theatre.

O'Farrell captures the period and the characters brilliantly. The reader is right there, alongside the women collecting eggs, tending to herb beds, and making tinctures and ointments ready for times of need, with the children trying to skip their chores and play instead, following after them round the house and garden or sneaking into the adjoining workshop of Shakespeare's father, where furs and skins are turned into gloves, from the plain serviceable pairs to the fashionable finery aimed more at show than hard wear.

Then lives are stopped by tragedy and all-encompassing grief - and O'Farrell is spot on in its description. I've lost family members over the past couple of years, and I felt that here I'd found someone who knew the emptiness and immense feeling of loss, who understood how I've felt for months, and could put it into words for me.

This is possibly O'Farrell's best work (to date, who knows what will come next?) but it just seems unfortunately timed. I think for some readers, as we head into months with corona virus dominating our lives, it may just be a little too close to home.

You Never Told Me by Sarah Jasmon 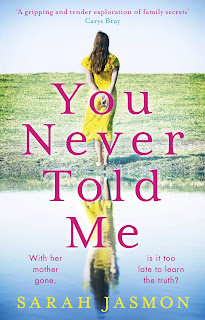 Charlie is on the far side of the world, running away from a life she's found increasingly stifling, when she's told her mother is seriously ill. Before Charlie can return home, her mother has died, but the past in its various guises is there waiting to be faced up to - the boyfriend she left only a few months before their wedding, the dog she had to abandon, her sister left juggling the care of young children and elderly parents. Charlie's mother has also left unfinished business behind - unknown to her family, she'd bought a canal boat; a link to her own past, and secrets that had been hidden for years.

Having nowhere else to live, Charlie moves into the boat, and finds herself drawn irresistibly on a voyage of discovery - learning the practicalities of canal life alongside the story of her mother's unknown early life.

You Never Told Me is an enjoyable and intriguing tale of self-discovery and family secrets, set on the semi-hidden world of northern England's waterways. The various threads of the story -  twist round and complement each other well. As her confidence in handling the boat and coping with life on the canal increases, so does Charlie's faith in herself and her ability to make decisions rather than just run from them. At the same time, she uncovering aspects of her mother's life which have never been talked about. Most of us probably dismiss parents as just that - parents - with no life or feelings before they gained that status; most of them fortunately don't have such tremendous secrets from us.

I found the whole description of canal life fascinating. I've walked alongside them often (including Bugsworth Basin which gets a mention in the book), stood at locks and watched boats move up and down, but never actually tried my hand at doing any of it. I'm not sure I'd actually be much help on a canal boat - I'd probably fall in the water - but it's nice to dream  ... 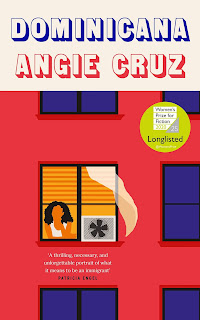 A young girl has a husband chosen for her by her mother who sees the marriage as a way for the family to enter the USA. This is how Ana finds herself 'married' to a man twice her age and living in New York at the age of 15. Ana has undergone a huge cultural shock and does not believe she can love her 'husband', who she finds herself afraid of.

I had a PDF version of this book which I read on my phone but... despite the formatting issues that this creates I found it extremely engaging and surprising.

The author interviewed generations of Dominicans and compiled this novel (for that's what this is) from bits and pieces of accounts that she picked up from family and friends of the family - so it is not entirely fiction.

The sacrifices that Ana makes to her family came as a shock to me - one that became more concerning when reading the final author's notes to explain the book.

I didn't love this book - because that feels like condoning the behaviour of everyone involved. I did find it fascinating and extremely disturbing. Well worth a read by anyone.

This has now been long listed for THE WOMEN'S PRIZE FOR FICTION 2020 and it's a book well worthy of going further.

It's not a huge tome so won't take forever to read but it's well written and powerful.

Publisher: John Murray
Genre: Adult fiction
Posted by The Mole at 12:28 No comments: