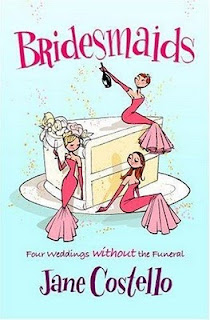 My wife ribbed me about reading this book because she classified it as 'chick lit'. It probably is but so what? I will read most everything - so long as it's in English!

The story is about Evie and her friends from Uni who are now being bridesmaids at friends and relatives weddings. We follow Evie, who has had no serious boyfriends and has always broken off relationships for trivial offences, as she goes through this eventful year.

While this book was never going to make the Booker long list it still remains a humorous and very enjoyable book. With it's short chapters and easy writing style, it holds your attention and amuses you with simple wit and makes the experience a most pleasant read.

I would recommend this book to anyone that wants a read that is not hard work but is humorous and fun. While it would probably appeal to women most there is nothing in there that turns men off. Give it a go!
Posted by The Mole at 23:04 No comments:

Recipe for Scandal by Debby Holt - Three and a Half * 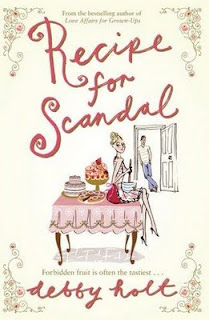 When this book arrived My wife branded it 'chick lit' and I never know if that is good or bad, after all she claims 'Con Air' is a 'chick flick'. She had already read a book by Debby Holt and said she enjoyed it so I settled down to read it.
I was surprised to find myself quickly getting into the story of Alberta and her family and their many varied personalities. Life is ticking along very casually for Alberta and Tony who are living together and have for many years until the sudden death of Alberta's father in strange circumstances. The repercussions of his death continue to grow affecting more and more of her family and an estrangement from Tony. However life goes on and everything ends for the best for everyone in her family.

I have read many books that cover these subjects recently and being somewhat a prude I can end up getting really angry about them, but this book didn't do that to me and I found myself enjoying the story more and more.
It is difficult to conceive of ANYONE taking any offence at any part of this book, although Tony and Daniel do take the mick from people of certain musical tastes (or lack of taste as they see it).

As lighthearted, fairy tale reading it was an excellent book and I would recommend it to anyone looking for something light and fun to read. If you want deep and complex then this isn't the book for you.
Posted by The Mole at 20:50 2 comments:

OK, this is supposed to be a young adult's book and it was supposed to be for my daughter to read, BUT having read it and been so engrossed by it, it didn't seem fair to not include it here.

I found it took a little while to get past the classroom "setting the scene" stage, but once it did, I find this to be an incredibly compelling read. The heroine, Nora, is caught between a growing attraction for her new class partner and a disturbing feeling that he is playing with her mind. If someone IS stalking her, who is it? her new class-mate, the new student from a posher school with a murky past or even one of the teachers? or is she imagining it all? There's a good mix of menace and romance as a series of bizarrely scary incidents build in intensity to a nail-biting climax.

As I said, this was a book I enjoyed immensely. I'm not a fan of graphic violence in novels and, as a teens book, this manages to maintain the atmosphere of danger and threat without it.

Two different star ratings for this; 5 as teenagers read, 4 as adults. Only given it 4 stars as at times it seemed a little lacking in depth of characterization and it is based on what is effectively a well- worn story - girl is attracted to boy who might not be all he seems, is he the good guy or the bad? but I enjoyed it and would recommend it.
Posted by maryom at 15:21 1 comment:

I found this a refreshing change from a lot of my recent reading. It's a harder book to review as I liked it a lot and it's always easier to say what was wrong with a book.
An enjoyable, engrossing book, charting a year in the lives of the Bradshaws told from the perspectives of various family members - the elderly mother, the three sons, their wives .Not a book of fast paced action but one of the gradual unfolding of characters, their lives, habits, histories and hopes, with the search for artistic inner self-exploration thwarted by the outer world of work and on-going family life .
Why only 4 stars? The title is taken from a musical concept and music plays an important part in the life of at least one of the major characters. Unfortunately I felt, as a totally non-musical person, that some of the analogies were lost on me - on a second reading I might take the time to find out what they mean.
Posted by maryom at 13:57 No comments:

I picked up "The Ex-Boyfriends Handbook"by Matt Dunn a couple of years ago almost accidentally in a Padstow charity shop and really enjoyed it - chick lit from a male perspective, a light fluffy Nick Hornby. So I was rather looking forward to reading "The Good Bride Guide" when it arrived through the post box. Sadly, it didn't live up to my expectations. It's OK but nothing really special. I suppose I'd been expecting an improvement, perhaps deeper character analysis or twistier plot, as Dunn matures as a writer but this book moves him to the "read and pass on" end of the market.

Basically, Ben Grant decides, seemingly on a whim, that it's time to settle down,marry and start a family. Having had no success at choosing his own life-partner, he enlists the help of his parents who provide him with a series of unbelievably bizarre blind dates all looking for Mr Right. Does he find True Love? does he settle for second-best? should he give up his artistic dreams and go back to the day job? well, it's a chick lit novel, so there's probably not a great deal of suspense about any of these questions.

It takes a long while to get going, the plotting is rather contrived and none of the characters really come to life. I was particularly annoyed with the portrayal of his parents - these people, not much older than myself, live in some sort of time warp where the average married woman stays home and looks after children and everyone listens to Frank Sinatra.

If you're looking for a light read for holidays or the commute or while waiting for kids, it's great; read it and pass it on.
Posted by maryom at 00:01 No comments:

This is my second PD James and has proved a very different read and style to the first.

Having finished this book I found it quite an experience. The reader knows the killer for far longer than I am used to with who dunnits and the story line is complete and well rounded.

I have to say that despite my enjoyment of the read I wouldn't read another. Because? Well although the book was extremely well written and complete, I just found it too long in the getting there. It's a me thing and should not reflect in anyway on the book.

I did enjoy it, but not all experiences should be repeated.
Posted by The Mole at 08:00 No comments:

Legend of a Suicide by David Vann - Four * 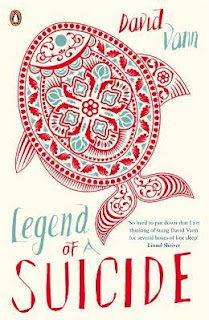 I read a lot of humourous books (Pratchett, Holt, Robert Rankin) although not exclusively humour. This book is the best, non humour book I have read in a long time! If you read no more of this review then at least try this book.

The synopsis of the book does not reflect the book I read. It is a story about a suicide. Or two? We keep shifting perspectives and see the story though a different view point although mostly narrated by the same 'person'. It is not comfortable inside the narrators head, but it is strangely compelling. Despite the discomfort I had to read this and enjoyed it immensely.

Having felt the twists in the middle, I may not read it again, however I may - to try to get a better understanding of how all the strands fit together.

Thank you David Vann - you really entertained me.
Posted by The Mole at 09:52 No comments:

I started reading my first Fay Weldon and very quickly became very involved and intrigued by the plot and it's setting. It was unusual in the way it was set in a future 'now', but not so very far future 'now'.

At one point the main character, Frances - who is written as narrator - invites you to put the book down, give up and do something else and this I found I could not do.

However later the pace slows and phrases are repeated from earlier in the book. Whether this is suppose...more I started reading my first Fay Weldon and very quickly became very involved and intrigued by the plot and it's setting. It was unusual in the way it was set in a future 'now', but not so very far future 'now'.

At one point the main character, Frances - who is written as narrator - invites you to put the book down, give up and do something else and this I found I could not do.

However later the pace slows and phrases are repeated from earlier in the book. Whether this is supposed to reflect the age of the 80 year old Frances, or whether it is just a padding technique I don't know, but I believed Frances to be very lucid for an 80 year old and these things irritated me.

All in all an enjoyable book.
Posted by The Mole at 09:03 No comments: