The Last of Us by Rob Ewing 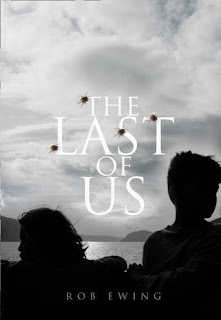 review by Maryom
On a remote Scottish island only five children are left alive; the rest of its population has died from a deadly disease brought over from the mainland. Led by Elizabeth, the eldest and daughter of the island's two doctors, these children try their best to keep going as 'normal' -  she holds lessons in the deserted school, takes them on 'shopping' trips among the abandoned houses, keeps them remembering the time 'before', makes sure they brush their teeth and that the youngest, Alex, gets his insulin shots every day. But things are obviously far from normal - and childish squabbles that would have no serious repercussions at other times, threaten the fragile community they have. Callum Ian, son of a local fisherman, resents Elizabeth being in charge - she's only a few months older and an 'incomer' to the island. But it's narrator Rona's own actions that lead to the REAL trouble...

Told from the point of view of eight year old Rona, events unfold on two timelines - what is happening 'now' and the events that started three weeks ago and led to the situation that Rona is in. Mingled in with both are Rona's memories of the time 'before', and of her mother who she firmly believes will be back to save her.
The details of what happened are sketchy, as you might expect from a child narrator, but as the full extent of the horror unfolds it becomes apparent that a disease possibly related to small pox spread from the mainland, and overwhelmed the island's meagre medical resources; although the children regularly monitor radio stations, the inference is that no one is alive on the mainland either.

Post-apocalyptic novels featuring adults are common enough but a scenario where the only survivors are children adds an extra chilling twist to events. Their attempts to cling on to their past, their hope that someone will return and rescue them, the horrors they encounter when having to enter abandoned buildings - and the rapid way in which these have become accepted - are at times heart-breaking. It's a story that will keep you reading- hoping for the best, fearing the worst.