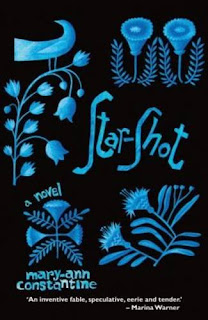 Something strange is happening in the centre of Cardiff - as people move around the city, particularly close to the Museum, they are encountering silent spaces where all noise is suddenly cut off. A handful of people seem more aware of the phenomenon than others - Myra, who feels some strange, almost physical, attraction to the museum; Theo, an expert on ponds and the life found in them, who carries out 'guerilla-gardening' style pond installations; single-parent Dan struggling with the loneliness of bringing up his son; Luke carrying out a study into the use of public benches across the city, and his supervising professor - the first to spot the extant of these silent patches and their alarming growth. As the paths and lives of these five cross and connect, the puzzle of the silence grows, and initiatives are put it place to fight it but nothing seems to stop its spread.


Set in a off-skew Cardiff, Star Shot is a fable-like novel that speaks, to me at least, of the dangers of wiping out nature through the spread of concrete urban centres, and of the isolation of individuals in our high pressure, work-obsessed modern society. These ideas are explored, not through highly-moralistic rhetoric, but through the lives of a small group of characters, most of them rootless in the city, cut-off in some way from family and friends, struggling to form new relationships. As the story evolves, we learn more about their backgrounds, how in various ways they are damaged or weighed down by their past. The exception is Theo, the only one who lives outside the city, who you might even say 'lives and breathes' nature. Everything in his life revolves around ponds; employed during the day by corporations and councils to install them as one of their 'green' credentials, and sneaking out at night making wildlife havens on waste ground, with ponds and plants. It seems like he is the one who holds the key - not only to halting the spread of 'silence' but to bringing the others together.


After a short initial confusion, as the characters were introduced in quick succession, I found the story taking off and holding me. It's not your average 'airport' or 'beach' read but an interesting, thought-provoking comment on modern life, which, although I enjoyed it this time, I'd like to re-read in the not too distant future, knowing how the complexities of the plot work round each other.

Seren have previously published a collection of the author's short stories, All The Souls, but this is Mary-Ann Constantine's first full-length novel.