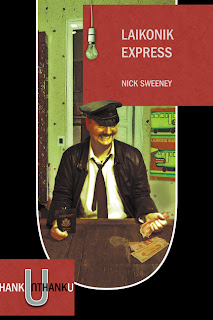 Nolan Kennedy and Don Darius are two thirty-something Americans living abroad, moving round Europe and the Middle East, teaching English. When Don leaves Istanbul for Warsaw, he leaves his novel draft in the rubbish bin. Kennedy finds it, believes it will make Don the next great American novelist and sets out in pursuit of him. From hot steamy Istanbul to snowy Warsaw is an epic enough journey in itself but Kennedy has barely arrived when Don insists they travel up to Abel on Poland's Baltic coast in search of a girl he's met on a train. Along the way they meet strangers that become friends and change the course of their lives.


Laikonik Express is a road-trip novel with a difference - it's by train! Like all road-trippers, long-time friends Kennedy and Don are chasing their dreams: Kennedy wants to be the man to discover that next great thing in American literature; Don just wants to meet up again with a woman he thinks he's fallen in love with. What they discover is that their goal might not be somewhere else or at some distance point in the future but here and now - and not in quite the form they'd expected.

It took me a while to get into reading this novel. In part this could have been due to getting used to e-reading on the new Kindle or that I feared, with Kennedy harping on about his discovery of new great American novelist and constant literary references, that it was trying too hard. It didn't really grab me till the start of the 'second leg' of the journey - up to the snowy wastes of Abel via, seemingly, most of the bars in Poland! Abel itself is wonderfully imagined - an out-of season seaside resort trapped under snow and ice - and it's here that they meet not the woman they'd been looking for but Krystyna, former war-time guerrilla fighter, former car development engineer in the US now returned home and dying but still beautiful and full of life.

It's a book that, having read it, discovered the overall pattern and seen how it ends, I'd go back and re-read, expecting it to grow on me.