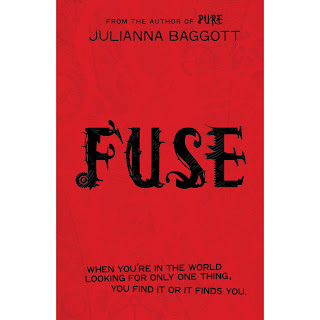 "When the end came, the world was divided. Those considered perfect, the Pure, sheltered inside the controlled Dome. Outside, the Wretches struggled in a destroyed world, crippled by the fusings that branded them after the apocalypse that changed everything.

Partridge, a Pure, has left the safety of the Dome in search of the truth. Pressia, a Wretch, is desperate to decode the secret that will cure her people of their fusings forever. Together, they must seek out the answers that will save humankind, and prevent the world's annihilation.

But the betrayal of Partridge's departure has not been forgotten.  As the Dome unleashes horrifying vengeance upon the Wretches in an attempt to get Partridge back, Partridge has no choice but to return to face the darkness that lies there, even as Pressia travels to the very ends of the world to continue their search.

Theirs is a struggle against a formidable foe, and it is a fight that will push them over boundaries of land and of sea, of heart and of mind. They can only hope for success because failure is unimaginable..."


Fuse continues the story begun in Julianna Baggott's amazing post-apocalyptic novel, Pure, set in a world divided into the Pure, living inside a sealed dome, and the Wretches or Fused who were caught outside by the Detonations with devastating consequences. I don't want to mention the plot as it would be too easy to give spoilers for Pure. If you've read Pure, you'll know what to expect; if you haven't, then you should! Suffice it to say that in their various ways and for varying motives Partridge, Pressia and El Capitan are trying to discover what actions brought about the Detonations, if there is a way the Fused can be cured and how they can create a better world out of the ruins of the old one.

Fuse does slightly fall victim to being the second book of a trilogy - the reader is already acquainted with this amazing world and its characters, and there's no way events can be brought to an overall conclusion - but even so is a great read. The plot cracks along at a fair pace with unexpected twists. There's time for far greater character development - I particularly liked that Lyda and El Capitan evolved into more complex people. I was just left wanting to know how things will end.

from Amazon
Posted by maryom at 12:07