The Disappeared by C J Harper 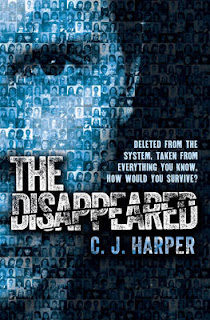 Jackson has lived most of his 17years in an elite 'Learning Community', being educated to become part of the Leadership that runs his country, but a brutal awakening is waiting for him. Sent along with his best friend on an errand by one of his teachers, he is attacked and beaten up and his friend left for dead. Trying to return to his school, he finds all record of him has been deleted and no one will admit to knowing him. Instead he's sent to an Academy, a strict, violent school aimed at churning out factory workers where he finds all his assumptions about his world turned upside down.

The story started excellently but as Jackson settled into the Academy the pace slackened. The Academy itself is a wonderfully imagined but  horrible place - more like a zoo than a school with the children treated like animals and teachers inside cages for their safety - but Jackson seemed a little inactive for my kind of hero. Even giving his sheltered upbringing I was surprised at Jackson's naivety and lack of knowledge of the world he lived in. I know this is a little bit par for the course for dystopian novels - the innocent, brought up faithfully believing everything they're told, discovers the unpleasant truth and sets out to right it - but he did seem immature for 17 and far too happy to wait for his mother to fix things.

I'm sure The Disappeared will appeal to teen conspiracy theorists and lovers of dystopian fiction. There's a lot of thought-provoking matter about education systems, human rights and even superiority being given solely on appearance hidden behind the plot for readers to get their teeth into.

The first in a series, it will be interesting to see how the story develops.

from Amazon
Posted by maryom at 10:37