Instructions For A Heatwave by Maggie O'Farrell 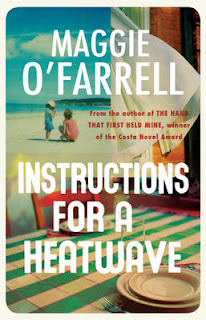 If you're old enough (I am) to remember the long hot dry summer of 1976, the memories of it will come flooding back - parched gardens, saving ever drop of water and above all the unbelievable, unrelieved sunshine for months! In this most un-English of summers, the Riordan family is in crisis. One morning Robert Riordan leaves his house, telling his wife Gretta that he's off to pick up his morning paper - and doesn't return. There are no clues to show where he may have gone; nothing was any more remarkable about this particular day over any other; he just seems to have disappeared. The absence of his passport and some money soon lead to suspicions that he hasn't had an accident or randomly wandered off, but deliberately planned a journey somewhere. As his three grown-up children, Michael Francis, Monica and Aoife, gather back at the family home we realise that each of them has secrets to hide - though their mother's is the biggest of all.

Instructions For A Heatwave is a marvellous absorbing read; a slice of family life, full of insight and unforgettable characters. O'Farrell gets under their skin so they spring to life off the page, seeming like people I'd known forever; lifelong friends or the next door neighbour who you think you know every last thing about - but then they surprise you with secrets!  Monica and Aoife have been estranged for several years: Michael Francis is busy trying to stop his marriage from sliding into divorce; but it's Gretta's revelation towards the end of the book that brings the jaw-dropping 'who would have guessed' moment. The only enigmatic one is the father Robert. No one knows why he's disappeared or where he may have gone. Always known as a quiet listener, rather than a talkative person, it appears no one, not even his wife, really knew his real thought and feelings.
There's an amazing attention to detail throughout - building up the atmosphere and letting the reader feel there whether with Gretta baking bread, determined that a mere heatwave won't stop her or lying on the old bedroom rag rug with Michael Francis, spilling his secrets to Aoife while Monica eavesdrops on the landing.

One of those books that grabs you at beginning and that you won't want to leave at the end!

Buy Instructions for a Heatwave

from Amazon
Posted by maryom at 12:13