Take It Cool by Jonathan Pinnock 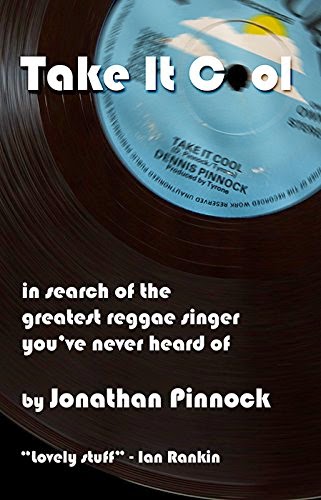 Author Jonathan Pinnock has always felt that his surname is about as far removed from cool as you can get; you may get Pinnocks who are strange, eccentric or even mad but at "two consonants away from disaster" being cool eludes them. Then, searching through a pile of second-hand records, he stumbled on something that would change his whole outlook - a reggae single "Take It Cool" by Dennis Pinnock. At last a Pinnock who was well and truly cool - but also, curiously, a Jamaican black Pinnock, as far removed from the author's white West Country background as it's surely possible to get. Could there really be any family ties between Dennis and Jonathan?

Now, the author had guessed before he started out on his quest that any, even the shallowest, search into Jamaica's past was going to lead him to the slave trade and plantation owners - so he was rather hoping there wouldn't be a connection! Even so he tracks down the early Pinnock colonists of the seventeenth century and their descendants, including one who quickly earns the name "Dog-face Phil". Alongside this story, he tries to track down Dennis himself via record label back-catalogues and that miracle of research tools, the internet, in the hope that one day the cool and un-cool branches of the Pinnocks may meet.
If you've watched the BBC's Who Do you Think You Are? you'll know that researching family history is a lot of pot-luck - sometimes it's full of surprises and stories, while sometimes it's of little interest to anyone beyond relatives. Having read Jonathan Pinnock's fiction, I expected him to turn what could be a plodding piece of research into something interesting and fun - and he did!  The different threads are easily-followed, and build an amusingly-told story that held the attention of a non-Pinnock with no interest in reggae (I didn't even recognise the names of it's stars!)

And for anyone interested in researching their own family history, there are a few pointers at websites and organisations that may prove useful