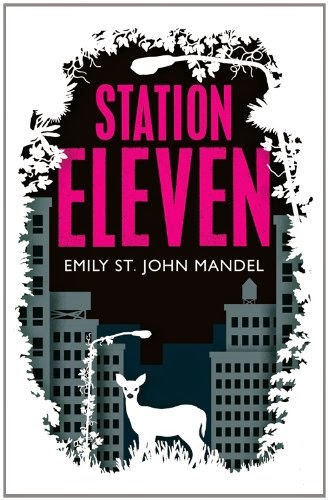 One day, much like any other, with people going about their daily routine, the Georgia Flu hits. With a 99% mortality rate, survivors are few and far between and within weeks the world as we know it is only a memory.
Twenty years later, and the initial years of violence and horror have died down, leaving a fairly settled 'armed peace'. Through this setting. a group of performers known as The Travelling Symphony are travelling, taking music and Shakespeare to the scattered communities in the Great Lakes area. Meanwhile in a disused airport lounge, an elderly man has set up a Museum of Civilisation, a collection of curiosities, things that were once part of everyday life  - credit cards, mobile phones - but now seem meaningless.

Station Eleven is a dystopian post-apocalypse novel with a difference - not just about surviving the the initial catastrophe but about how society/civilisation, call it what you will, continues afterwards. The story weaves backwards and forwards from the years before the epidemic, the outbreak and chaos of it and twenty years after, following the intertwined lives of the main characters, all of whom have links back to famous Shakespearean actor Arthur Leander who died the night the epidemic broke; his wife Miranda, son Tyler, best friend Clark,  Kirsten, once a child actor and now part of The Symphony and an excellent knife-thrower and Jeevan the man who came to Arthur's aid as he collapsed on stage.
I think Station Eleven is a book that readers will see many different things in - to me, the motto "Survival is Insufficient", taken by the Symphony as a whole, and Kirsten personally, is the key to the novel. Borrowed from Star Trek Voyager's Seven of Nine, it encapsulates the idea that mere subsistence level living is not enough - that being able to explore one's own individuality, to create, through art, music or words, is key to being human. For the Symphony specifically its what defines them as people - when civilisation started to collapse around them, their musical instruments were the things they saved. Kirsten saves a paperweight for its beauty alone and no practical reason. To quote Chakotay from the same Voyager episode, "There's a difference between surviving and living", which for me sums up the feeling behind this novel.

It's not Shaun of the Dead or 28 Days Later but a deeper, philosophical look at a sudden break-down of society. There's a lot within it to appeal to geeks like me - with references to greek myths, Shakespeare and Star Trek; the latter being particularly relevant as it was never afraid to move beyond science fiction to wider questions of philosophy, morals and humanity in a similar way to Station Eleven itself.


Sadness permeates the book, not just for friends and family lost to the epidemic but for the disappearance of a whole way of life. Overall though the feeling is upbeat and positive, hopeful that people can re-build a world as good if not better than it was before.

I really enjoyed my first read-through and it feels like a book that hasn't revealed all its depths yet but will re-pay further reads with fresh discoveries to be made.


Other reviews; Curiosity Killed the Bookworm
For Winter Nights
Girl! Reporter
Posted by maryom at 13:22