If Nobody Speaks of Remarkable Things by Jon McGregor 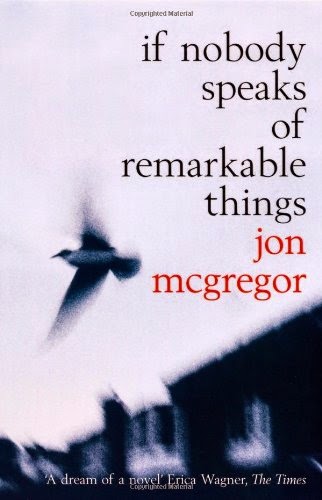 On a late summer's day the residents of a street in the north of England are going about their daily routines. Nothing special is happening - a man is painting his windows, two boys are playing cricket, a toddler rides his tricycle up and down the street, an elderly couple celebrate their anniversary - the sort of things that make up any average day...then something happens, a terrible thing which leaves its mark on all who witnessed it.
A few years later one of the young women from the street is trying to face up to some unexpected, disturbing news but her thoughts keep getting dragged back to that fateful day....

I picked this up from the library as the author is going to be appearing at a local book festival - and I was stunned! I just don't know how I haven't discovered this wonderful book, or in fact any by this author, before.
It opens with an over-view of the anonymous city, with passages that read like poetry, then zooms in one street as its inhabitants go about their daily lives, focussing on all the little things that make up a day - all rather like Under Milk Wood.
The reader's told quite early on that something dreadful occurred on this specific day - but the actual details are withheld, and I had the feeling that the author was teasing me with possibilities - would something happen to the elderly couple catching the bus? the man making a charity bungee jump? the toddler on his trike? When the tragedy occurred, it wasn't what I was expecting.
These events alternate with the (presumably) present day, as the young woman copes with another life-changing event, explores her relationship with her parents, meets a new guy - but all of these things are still marred by the past.

A curious feature is that barely anyone is named but referred to by gender and house number, underlining the fact that, like so many of us, the inhabitants of this street don't really know their neighbours. It also serves to make the characters more universal - they're all people we can identify with, maybe even like some people we know - and that's what this book celebrates; the everyday captured and turned into something special.

The good thing about discovering this book so very late, is that the author has had time to be writing more - so it's time for another trip to the library!