The Boy Who Led Them by George Chittenden 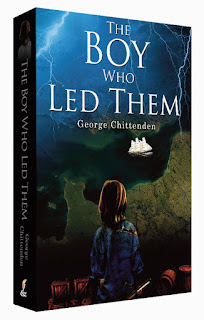 When Stanley discovers a message in a bottle on the seashore he finds he needs to know who the writer was and as much about him as possible to be able to see if there really is treasure to be found. Taking the message to a local museum he meets Reg who tells Stanley what he needs to know and the adventure starts.

The first impression from the description is that this is a children's book and yes, I suppose it is but the way and the style it's written in is ageless. It sounds a bit clichéd? When Reg starts to tell his tale of Jacob Swift, Swift is a young boy but events make him grow up fast and the reader quickly forgets his age and thinks of him as "The Boy" - the king of the smugglers.

Packed with historical fact and historical references this book was a fascination for me and engaging doesn't come close to describing it. I didn't feel patronised or preached to but I felt I was sitting with Reg, in the museum being told the story with a real passion - like only a true fanatic can.

My only concern is, do young children read about smugglers any more? If they don't then I think they should be made to. But don't forget to read the book before you let them have it.

Buy The Boy Who Led Them