If I Never See You Again by Niamh O'Connor 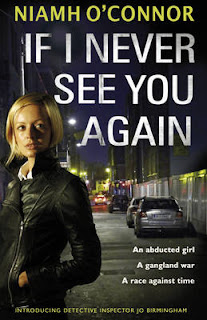 DI Jo Birmingham is a single mum trying to cope with the needs of her two sons and the demands of her job - neither task is helped by her boss, ex-husband Dan who appears to be standing in the way of her promotion. When she stumbles on the murder of a Dublin prostitute and is given charge of the case, she thinks she might at last have the chance to prove what she can do.

Told mainly from Jo's point of view, the story follows the unfolding Garda investigation, linking the first murder with others committed in the same area of Dublin leading to the realisation that there's a serial killer on the loose. There are slight 'asides' to hint at the killer's reasoning and methods but nothing to give the culprit way - and for once I had no idea who dunnit till the very end, though there were plenty of suspects to choose from.

Niamh O'Connor is a new author to me who I discovered via Twitter when she was nominated for an Irish Book Award for the latest Jo Birmingham thriller, Too Close For Comfort. Unfortunately at the time my library didn't have that available but also it seemed logical to start at the beginning of a series. I discovered afterwards that If I Never See You Again had also been nominated for an award - in the Best Newcomer category, 2010. I do expect anything up for an award to be good, but this was absolutely my kind of detective story - a good balance between work and personal life (and the problems of both), not too much gore and, most importantly, believable characters - both cops and villains.

If I Never See You Again is an engrossing, unputdownable read. It's nearly 400 pages long but I whizzed through it in a couple of days. On this showing, Niamh O'Connor is a crime writer I definitely want to read more of.

Buy If I Never See You Again

from Amazon
Posted by maryom at 09:20