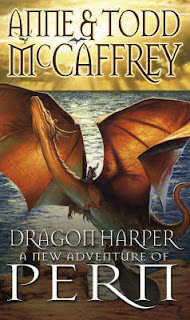 First Trip to Pern
Review by The Mole


Kindan is an apprentice harper at the Harper Hall but he is finding the lessons very difficult and although he has his friends, Nonala, Kelsa and Verilan, he also has enemies, such as the bully Vaxoram. Things begin to improve for Kindan when he beats Vaxoram in a duel and Vaxoram becomes first his servant and then gradually his trusted friend. Then Kindan impresses a fire-lizard and becomes the proud owner of the magnicent Valla. At the hatching he meets Koriana, daughter of Lord Holder Bemin of Fort Hold. She also impresses and she and Kindan fall in love, but her parents disapprove and she has to return to Fort Hold. Then a plague begins to spread across Pern, killing nearly everyone infected. Kindan and his friends search the harper records to see if they can find a cure, but all they can find is mention of a similar plague over a hundred Turns past. As the plague gets worse Kindan and Vaxoram are sent to Fort Hold to help tend the sick. Kindan will be reunited with Koriana, but will she be free of the plague, and will he be able to find a cure before more people die?

I decided to get involved in the Anne McCaffrey Reading Challenge. My family are familiar with some of McCaffrey's writings and I have to admit to never having read one and it was for this reason that I chose to get involved. Being almost devoid of McCaffrey's books in the house I checked the library catalogue and found them not a lot better off. However I chose one from their list and waited for it to become available. It turned out to be by both Anne and Todd.

I found some of the ideas of the world of Pern to be most intriguing, conceptually, and can fully understand how the Pern novels have earned their reputation. But.... I found this book to be very sadly lacking. The hero, Kindan, I couldn't identify with and, frankly, in the duel referred to above, I had hoped that Vaxoram would give him a beating! Not that I found Vaxoram that believable either. I have read fantasies where we don't stand still long enough to start to identify with the characters but unfortunately this one is not one of those.

One of the concepts of Pern is that women and men are treated as equals and throughout the book this sentiment is voiced. Yes, voiced, but if you read it you find that men don't treat them that way. It is an ideal that can be written as was the case in another fantasy that I recently read and reviewed.

I always try to look for the positive but with this book I struggled and come away with only the desire to read one of Anne's EARLY Pern novels to see what she did with the ideas.