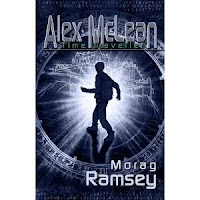 Climbing back through Time
review by Maryom

Alex and his dad are both keen climbers but so far despite reaching Level 6 they've only climbed on the artificial climbing wall inside the nearby quarry. Alex dreams of being able to climb Edinburgh Castle Rock, but knows that it is banned - no matter how good you are. Then he finds himself contacted through his mobile phone by someone claiming to be from the future representing the Scientific Testing and Recording of Aggression Programme (STRAP) - and capable of sending him back in time! They want him to return to 1314, to join a small band of Scots attempting to climb the Castle Rock and liberate the Castle from the English. Could this be the way to achieve his dream?
An exciting adventure mixing history, science fiction and everyday life and problems, it could either be read as a fun story or as an insight into the past.
Part of a series of books involving children travelling in time to major historical events or to become part of everyday life in the past, but also with a story arc involving STRAP and its rival organisation SHARP - The Scientific History and Art Reclamation Programme. Aimed at the 8 - 12 age range with a blog - dannydoestimetravel.blogspot.com and competitions on the publishers web-site.

from Amazon
Posted by maryom at 16:13