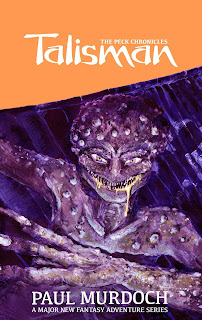 James Peck's dad has walked off into the sunset. His mum, a woman with a local reputation for being bossy and controlling, doesn't seem to care but James is convinced his dad hasn't run off but is in need of finding to help him to safety.

Escaping from gossips in the local shop, James follows a stranger to a weird location and meets Mendel - a wizard from another world who is trapped in another body and needs help to save his own world - Denthan. James agrees on condition that Mendel will help him find his father. So they set off to Denthan but a real best friend doesn't let you enter such adventures alone so Craig forces his presence into the scene - with Bero, his dog.

James's first task is to find a talisman to control the power of an invading wizard - hence the title.

Reading this as an adult - one who grew up living the space race - I found the world created difficult to accept, but that's a "me" thing. It's better to think of Denthan as another dimension - one where the laws of physics are completely different because, after all, they have magic and wizards.

There are, apparently, 7 books in the series and if I had to level criticism it would really be that we stop before we know the role of all the characters in the book - a group enter Denthan quite late and we don't really have any idea why.

Having said that this story is not like any I've read before in that the second group is a motley crew and you are genuinely left wondering what they can hope to achieve.

An excellent story that will delight the younger reader and have them looking for book 2 immediately. Well it was published in November so it's there for the asking.

Publisher - Strident PublishingGenre - Children's (9+), fantasy
Posted by The Mole at 09:55