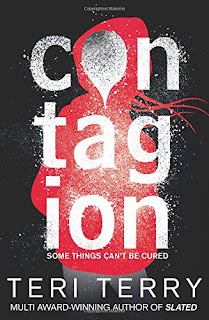 URGENT!An epidemic is sweeping the country.You are among the infected. There is no cure; and you cannot be permitted to infect others. You are now under quarantine. The very few of the infected who survive are dangerous and will be taken into the custody of the army.

Kai's younger sister, Callie, has been missing without trace for a year, so when a girl called Shay contacts him with new information, he has no doubts about dashing up from Newcastle to the small village of Killin in Scotland to investigate the lead. Together they try to piece together Callie's last known movements but events in the wider world are working against them.
A secret scientific facility on Shetland has been conducting some very dodgy experiments, and when a supposed earthquake destroys it, a horrendous,highly-infectious, fast-acting flu virus is leaked into the world. Special army units are called in and quarantine zones are soon established across Scotland, making it difficult to travel, but even so the disease continues to claim victims at a dreadful rate. Very few survive, and those who do are considered too dangerous to be left at large.
Against this backdrop, Kai and Shay pursue the leads to uncover what exactly happened to Callie, and why ...

Anyone who's read this blog will know how much I love Teri Terry's teen/YA novels, whether set in the dystopian worlds of the Slated trilogy and Mind Games, or the urban fantasy of Book of Lies. This time the story is  a mix of dystopian horror as a mystery illness sweeps the country, thriller and conspiracy theory as Kai and Shay uncover far more than they'd expected in their search for Callie.
It's a great read, with characters to warm to, and a plot to entice you in - the sort of book you don't want to put down, but read in one sitting (no matter how late you have to stay up to do that!). You'll be left wanting more though, as this is the first book of a trilogy, and, although it ends at a logical point, a lot of questions have been raised and not answered yet. I can't wait to see how things develop in Book 2!