Underneath by Anne Goodwin 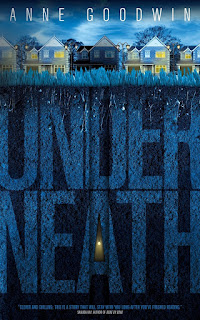 By any reckoning, Steve should be happy - he's finally decided to settle down after spending most of his adult life travelling the world; he's won enough on the lottery to buy a nice house; he's got a new attractive girlfriend who's willing to move in with him. How could it all go wrong? But somehow it has, because the reader knows from the outset that Steve has a woman imprisoned in his cellar ...

It sounds rather like the set-up for a psychological thriller or domestic noir full of improbable emotions and outrageous violence, but Anne Goodwin's Underneath couldn't be further away from those stereo-types. Instead it's a quiet novel that gradually unpicks the past to discover what lies behind the facade that Steve presents to the world.
The story is told in the first person from Steve's viewpoint, and so the reader is privy to his current thoughts and hopes, and his flashbacks to childhood, a time which should have been full of love and happiness, but wasn't.
On a superficial acquaintance, Steve is an average guy, perhaps a little more interesting than some even because he's spent most of his life travelling the world, working in undeveloped countries, not sitting at an office desk, but behind that facade he's a troubled man, permanently damaged by his upbringing. His father died before Steve was born, and, with a mother consumed by grief, and older twin sisters who bullied him throughout childhood, Steve's childhood lacked the love and kindness that most of us take for granted. Obviously drawing on her experience as a clinical psychologist, Anne Goodwin takes what could have been a dry case study and builds it into a compelling read.

It's a novel I'd highly recommend for Book Clubs. there's much to discuss about Steve's life and his relationship with women - is his travelling part of an un-rooted feeling? is he permanently searching for home? is his girlfriend unreasonable in her demands, and would they have lived happily ever after if she hadn't been?

It's frequently said that to understand all is to forgive all, and strangely, by the end, although I condemned the way he acted, I felt rather sorry for Steve - he should have been the villain of the piece but it seemed that he was so influenced by events beyond his control that he was more a victim of circumstances.