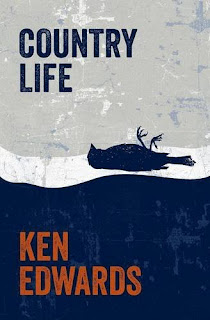 Dennis Chaikowsky is young, unemployed, currently house-sitting while his parents winter on the Costa and being forced by the Benefits and Opportunities people into taking a job in 'retail management' (shelf-stacking) the local supermarket. This isn't the real Dennis though - he is working on a musical masterpiece,  recording sounds that form the backdrop to his life, rearranging them through his computer to form his definitive work World Music parts 1-25. He's distracted from his vision by the political ramblings of his Neo-Marxist friend Tarquin, his attraction to young mother, Alison, and his fear of Alison's husband, rock musician Severin - all building to a scenario that feels like it will end in tears.

If you could ever have a mash-up of Virginia Woolf's The Waves and the film Withnail and I, this is it!
Against a backdrop of bleak, windswept coast, overlooked by the glowing nuclear power station, two rather pretentious young men plan to set the world to rights - one through music, the other though revolution - but the world, to be honest, isn't really interested, and has nice little niches prepared and waiting for them.
The countryside isn't a jolly bucolic setting for picturesque herds of cows or sheep - but a grim, depressing  place where any animals are there as 'controls' for possible nuclear contamination, and Dennis wants to get away and to the City with all the fervour of one of Chekhov's heroines. For all the bleakness, I loved Edwards' descriptive passages, the mood they evoked of a natural world that doesn't need man.
In sharp contrast, Dennis's story is more of a comedy, though very, very dark and veering closely towards tragedy at times.
At times you might wonder where the story's going, but stick with it. This is the first of Ken Edwards' work that I've read, and I'll certainly be looking out for more.