The Trouble with Goats and Sheep by Joanna Cannon 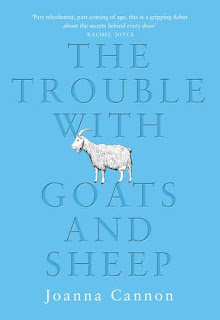 
In the summer of 1976, while England suffers under an unnatural heatwave, Mrs Creasy goes missing from her home, Number 8, The Avenue.  Did she just wander off of her own accord? was she abducted? murdered, even? or had she stumbled on the secrets her friends and neighbours keep so carefully hidden? The residents of The Avenue can only agree on two things - the heat makes people do funny things, and the weird guy at number 11 is probably involved somehow... As the rumours spread, ten year old Grace overhears the adults gossiping, picks up on the fear in their voices without really understanding, listens to the vicar talk about goats and sheep, and becomes convinced that if she and her best friend Tilly can only find God, Mrs Creasy is bound to return.

After a longer than expected Christmas break, this is my first review of the New Year - and what a stunning book to start with! I'm fully expecting this is going to be up there in eleven months among my picks of 2016.

A story of 'Us' and 'Them', The Trouble With Goats and Sheep is an adult story told mainly from a child's perspective, and it was Grace's 'voice' that hooked and held me. The style feels simple and natural, with Grace displaying that curious mix of naivety and insight that children sometimes seem to have. Listening in to the world of adults, Grace hears, often repeats, but doesn't always understand what she's heard, leading to a lot of deadpan-delivery humour. On the other hand, at times her observations can be sharp and cutting, seeing through the evasions that children are fobbed of with and going straight for the truth.
Her child's-eye view of the world is charming, and beautifully captured - but what's happening in that world is unsettling to say the least! For at the heart of this story is a long-hidden secret brought bubbling back to the surface by the disappearance of Mrs Creasy. As summer progresses, and Mrs Creasy shows no signs of returning, the heat and tension rise, and the reader begins to see that behind the respectable lace-curtains something rather nasty has been going on - for this small community has banded together to victimise and ostracise the one person in their street who doesn't quite fit in. Although not necessarily close friends, the residents of The Avenue all get along, share the same set of values and general outlook - except for Walter Bishop at number 11. He's something of a square peg in a round hole, the weird goat among a herd of docile sheep, and a convenient person to blame whenever anything untoward occurs. The author shows how a stray comment can become believed in without a scrap of evidence, how people band together to protect their own but how that soon turns to bullying and intimidation. For a debut novel, this is something rather special, and I'm longing to read whatever Jo Cannon comes up with next!

I'm not sure if the author personally remembers that long hot summer of 1976 (it's not really polite to ask, is it?) but I can, and can vouch for many of the little details; the half-forgotten food and tv programmes and presenters of the time, the fanatical saving of every drop of water, the parched cracked gardens, the suspiciously green one, often surreptitiously watered after dark, sparking gossip and back-biting among the neighbours but mainly I remember the long glorious sunny days. For me, every summer since then has proved to be rather a disappointment!

If I've enticed you into reading, you don't need to just take my word - there's a free sampler available from the publishers here