The Liveships Trilogy by Robin Hobb 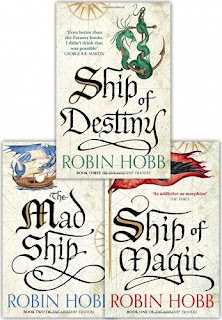 
It's a little unusual (and maybe a little lazy) to review a trilogy at one go but this really is one long story (extremely long as even an individual book can be over 900 pages!)

I'm a late-comer to Robin Hobb's work, only really plunging into it last year with Assassin's Apprentice  I'd started out with the plan of reading all Robin Hobb's Farseer novels before publication of the last - Assassin's Fate - but that plan fell well behind. I'm still carrying on though as I'm become enthralled by her world-building and story-telling and sheer range of imagination. Something that also makes Hobb's stories stand apart is that, as in Ursula le Guin's work, among the twisting plot-lines and fantastic creatures you'll come across an idea - political, moral or ecological - that is just as applicable to our world as it is to the fantasy one.

At the heart of this trilogy are the Liveships themselves - made from special 'wizard' wood, after their owners have lived and, just as importantly, died on their decks, the ships become sentient and bond with their captain. When her father dies, Althea Vestrit is denied the chance to bond with her family's ship Vivacia, as her brother in law decides he will be the new captain, forcing his son to become the bond with the ship - but that's only a little part of the story. There are slave traders, pirates who are determined to disrupt that trade, mysterious masked people who live along the Rain Wild river and control the source of wizard wood, intelligent giant sea-serpents, and dragons.
The Liveships trilogy fits into the complete series as Books 4-6, though could easily be read as a stand-alone story, and after the first three, Assassin's trilogy, came as a complete change of pace and setting. To be honest I didn't settle in quite so quickly,  mainly because I'd expected to be back in Fitz's world, perhaps with him playing a minor role in the story, although obviously not a central character. As it is, at first the two story-lines don't seem related at all. It's only perhaps halfway through the second Liveships book that the connection becomes apparent, but by that point I was well and truly engrossed in this new, astounding world.

That's six of the series read, and I'll now be returning to Fitz and the Fool with the first book of  the Tawny Man trilogy - Fool's Errand.