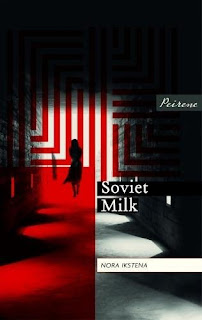 Set in Latvia during the years of Russian rule, Soviet Milk explores the lives of two women, mother and daughter, their dysfunctional relationship, and their attempts to find fulfilment under a regime which doesn't care about individuals.


Born just as Russia invaded Latvia at the end of WW2, the mother struggles against the system, refusing to accept its rules, and ending up removed from her prestigious research post, and banished to a remote village and the fairly humdrum work of running a women's clinic - an important enough role for the women she treats, but one she feels is beneath her. The focus of her life has always been her scientific work, and with exile in the countryside and loss of the work that she considers worthwhile she enters a downward spiral of depression.
Raised by her more pragmatic and nurturing grandmother, the daughter soon learns to accept things as they are, both personally and politically, to make compromises and live life as best she can. At an early age, she takes on the role of caring for her mother, in charge of everyday practicalities such as cleaning and cooking, but also helping through her increasing bouts of depression and anger. Ultimately though, she realises that to have a future of her own she needs to leave the claustrophobic atmosphere of home, and return to the city.

It's impossible to deny that for most of its length this is a rather downbeat story. It's easy to imagine that in a different time and place the mother would have had a brilliant scientific career, brought up a family in a loving, caring environment, but the repression she's felt all her life has left her emotionally damaged. At the end though I felt that the grandmother and daughter had managed to keep hope alive, that, despite everything, their future looked hopeful.
I rather wish I knew more of Latvian history, as I couldn't help but think that the mother's life perhaps echoed it - annexed by the Soviet Union, forced to live under an alien regime, and striving for freedom, sometimes hopefully, sometimes losing all hope. Maybe I'm over-thinking things again ...