In Our Mad and Furious City by Guy Gunaratne 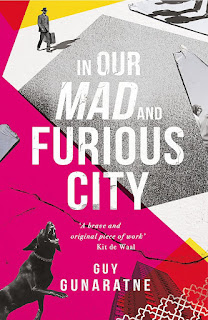 Yusuf, Selvon and Ardan have grown up together under the shadow of Stones Estate's four tower blocks - attended the same schools, played football together, hung out listening to music, the things kids and teens do. To them, ethnicity, colour, background don't matter. But around them the world feels differently. A soldier has been killed; Muslims (ALL Muslims) blamed. Tensions are mounting. Anger rising. White racist skinheads on one side; radicalised Muslims on the other; waiting to clash ...


Guy Gunaratne's debut novel is a gripping and moving portrayal of life on a run-down inner city estate, of the precarious balance between hope and despair with which its inhabitants live.
The story, set over a period of forty-eight hours, is told from a variety of viewpoints; mainly from the perspective of three teenagers - Selvon, Ardan and Yusuf - but also that of Selvon's invalid father, Nelson, and Ardan's mother, Caroline, both of whom remember similar events from the past, and give context and perspective to the current wave of violence. It's hard to believe that this is Guy Gubaratne's debut novel. He balances the various first person narratives brilliantly - each person speaking/thinking in their own way. The chapters are headed by the narrator's name but after a while you can tell who is talking by the words, the rhythm and style of their speech. Just occasionally I found the 'street' talk tricky to follow (I'm neither a Londoner nor young) but found if I just let it wash over me, as I might if someone were actually talking that way to me; the definition of every individual word didn't matter, as the over-all meaning was clear.

The three teenagers feel trapped by their environment, but react differently. Selvon is hopeful - he spends his life training - running, boxing, gym work - hoping his promise will lead to a ticket out, a university place and athletic fame. Ardan is despondent - doesn't see his way with words, his rapping and music, as a talent he can exploit, and a way to leave. Fate seems to have dealt Yusuf the worst hand - his world was once safe and secure but following the recent death of his father, he's lost and alone, feeling the new wave of Muslim radicalisation reaching out to ensnare him, and not knowing how to resist.

Their lives are all about to be derailed though by the riots ready to engulf their home. In one way it's new force - white versus Muslim - in another it's a repeat of previous incidents of racial hatred. Nelson remembers the race riots of the late 50s when a white mob attacked the newly-arrived West Indians; Caroline was sent to London, while a young woman, by her Republican family to escape the violence of the Irish Troubles. A stark warning that while ever we divide society into 'us' and 'them' such tension, with its inevitable outbreaks of violence, with continue to exist.
It's a stunning read, that gets behind the headlines of racial hatred or inner city housing issues, bringing life to the day to day struggles and pressures, showing us 'people' not 'problems'. Without questioning its 'adult fiction' tag, I'd also recommend it for older teens - the main characters are 18 year old, school-leaving age, concerned with the normal teenage things - music, football, sex - and I think it would appeal to readers of a similar age.