World Burn Down by Steve Cole 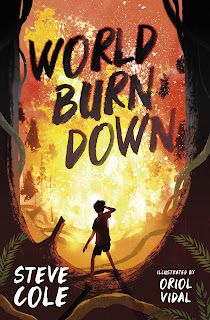 Carlos is at home, impatiently waiting for his mum to return from work, when door of his flat is broken down, and he is kidnapped. His mother's job with IBAMA, Brazil's Environmental Authority, involves protecting the Amazon forest from illegal clearing by farmers or miners, and her actions have annoyed some very ruthless men. Carlos is taken far into the Amazon forest where his abductors plan to hold him to teach his mother a lesson, but an accident gives him chance to escape. He isn't safe though as fires are raging out of control all around him. Will he be able to outrun them? or will he find himself running straight back into the clutches of his kidnappers?

This latest book from well-known children's author Steve Cole is a fast-paced adventure set against a backdrop of the destruction of the Amazon forest. Primarily it's an action story, with Carlos attempting to escape his captors, but seeming to run from one danger straight to the next. Behind the action though are important things to be learned about the destruction of the rainforest, and the reader gets to share Carlos' horror at what he sees, and his realisation of the importance of the work done by people like his mother. Till now he's seen it as just a job, something that takes her away for long hours, without maybe fully realising its global significance. His previous experience of the forest has been of sanitised tourist-trails designed to delight and enthrall; now he's seeing first hand the realities of land-grabbing, the fires which lay waste to huge areas each day, and the gold mines which turn jungle into a sterile moon-scape. It's an excellent mix of fact and fiction which will both entertain and educate.

Aimed at 8 year olds and over, as always with titles from Barrington Stoke, the presentation - font, colour, chapter length - is designed with reluctant and dyslexic readers in mind, but none of this detracts from it being a gripping, nail-biting read, with Oriol Vidal's illustrations bringing the story vividly to life.