The Light Between Oceans by ML Stedman 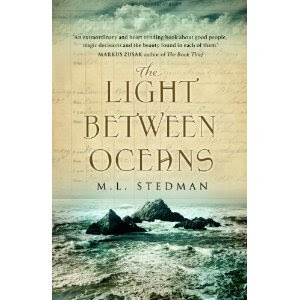 Tom Sherbourne is the lighthouse keeper on remote Janus Rock, situated nearly a hundred miles off the Australian coast between the Indian and Great Southern oceans. He and his wife Isabel live there in isolation apart from the occasional visits of the supply boat. After the horrors of the first world war, Tom has found a perfect spot to heal his mental scars. The only shadow in their life is their childlessness.
When a small boat is washed ashore Isabel believes her prayers have been answered - for in the boat, alongside a dead man, is a baby. After a series of miscarriages, she is desperate for a child and sees this as her chance to become a mother.
After some doubts, Tom is persuaded to not report the finding of the boat and the couple bring the child up as their own, naming her Lucy, after the light that governs their lives. It's only on a rare visit to the mainland that they realise that Lucy's natural mother is still hoping that her daughter, actually called Grace, will be found one day. The couple return to the refuge of Janus Rock with Lucy but Tom's doubts about whether Lucy belongs with them are increasing and life is never settled again.

The Light Between Oceans is a wonderfully atmospheric and engrossing tug-of-love story that manages to pull the reader's heart strings without becoming sentimental or 'soppy'. The descriptions of Janus Rock bring it to life so vividly that it seems possible to feel the sea-breeze and constantly changing ocean, though at the same time it mirrors Tom and Isabel's moral situation - isolated but not totally free from the world.

The characters tie themselves into such a knot that it's impossible to see a way out for them. I was torn first one way then another in trying to decide where and with whom Lucy/Grace belonged - sometimes veering in favour of Tom and Isabel, sometimes of her real mother. I was a bit afraid that the author would untangle it by some lazy 'happy ever after' twist - for the credibility of the story, I'm glad she didn't.

Buy The Light Between Oceans

from Amazon
Posted by maryom at 08:13