The Map Of Marvels by David Calcutt 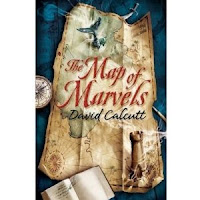 A rainy day. Connor sits at the table and tries to draw a map for homework. His sister Alice is making up stories with her toys on the floor. He draws a tower - the Tower of Truth - on his map. She builds one from books and toys. But Alice sees a horrid face staring from the Tower window out that frightens her, so she scribbles it out. Connor is angry and knocks Alice's tower to the floor, but something catches him up, whirls him around and Connor discovers himself on a ship INSIDE his map. With him on the ship are Sindbad, King of Pirates, and his fierce and fearless daughter, Sherazhad - they too have been plucked from their own world. The only way for any of them to get home is to follow the adventures that the map leads to, till eventually they can find the way to the Tower which holds the key.
Inspired by the Mappa Mundi in Hereford cathedral, David Calcutt has created a world where the mundane, everyday world of a child playing with their toys mixes seamlessly with fantastical journeying in a different reality. The Map of Marvels is a wonderful, action packed, terrifying at times adventure, through the landscape of The Arabian Nights. The reader is transported along with Connor from stormy seas to bone dry deserts, meets with pirates and giant whales, djinn and ifreets but the scariest of all is the man who Alice saw at the Tower's window.
If you or your children loved Narnia or the Inkheart Trilogy, then try this. The publishers suggest this is a book for the over 11s but it's the kind of adventure tale we used to read as a bedtime story to our 8 year old daughter and I feel it would appeal to a lot of that younger age group.

Buy The Map of Marvels

from Amazon
Posted by maryom at 09:00