Act Of Murder by Alan Wright 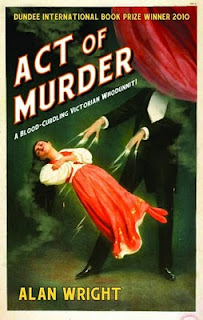 Murder with a smile
Review by TheMole

I will start by stating that I am not a whodunnit 'fan'. I can, and will, read most anything but if I am a fan of anything then it would be fantasy. This, however, does not stop me enjoying non-fantasy books that I pick up. I start with this statement because most whodunnit fans come out with 'well I got it very early on', or 'it was quite obvious who did it from the word go' or some such statement. I don't read whodunnits like that - for me it's the journey and not the getting there.

This book is the Dundee International Prize winner for 2010.  Maryom read and reviewed the 2009 winner Dead Wood and enjoyed it so I thought it was my turn to try the 2010 prize winner.

It's Wigan in 1894 and Richard Throstle, a man of dubious morals (it's dubious if he has any), is found mudered in a particularly bloody and messy way. He has a 'magic lantern company' that gives audiences a treat and a bit of a scare as he uses the technology to good effect at a time when others are finding it 'old hat'.  Unfortunately the body count doesn't stop at one as Sergeant Slevin, of the local constabulary, leads an investigation to find the killer.

No, I didn't guess the killer in advance - but then I didn't try to either. What I did do was to experience a very enjoyable read with plenty of gore and death that didn't offend the delicate prude that I am. Humour abounds in the book and, surprisingly, sits very well in the plot. At one point someone is going to go out for 'fresh air' - "In Wigan?" comes the retort. Slevin has a constable under his command - Constable Bowery - who is a very large man but a man of little brain and this leads to a fair amount of the humour. Having said that the story is a consistent murder mystery that was truly a joy to read.

If, like me, you are not a 'whodunnit' fan then  I would still recommend you consider this book.

can be purchased from Amazon
Posted by The Mole at 08:00