Snowdrops by A D Miller 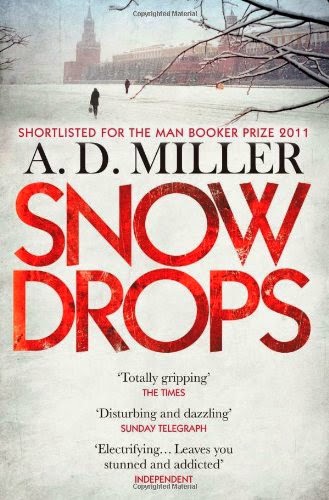 Nick is engaged and about to get married but first he's got something he needs to come clean about to his fiancée.
Back when he worked in Moscow as a quiz-kid corporate lawyer, enabling dodgy financial deals, Nick found himself sucked in to a similar, more private, one. Seduced by the enigmatic Masha, he left his scruples and morals behind and went with the flow, agreeing to anything to please her, only discovering too late what he'd become involved with....

This is one of those books that I'd heard a lot of praise for, managed to come late to the reading of but that left me feeling a bit flat and wondering what all the fuss was about. Set in modern, post-Communist get-rich-quick Russia, it's a tale of the rapid disintegration of moral standards - of society in general and of one man, Nick, in particular. It's told in the form of a letter to his fiancée and ok this is just a plot device but it doesn't ring true - as a confession of past misdeeds he probably could have summed it up in 2 sides of A4. The big reveal of what he's done is too long in coming and too obvious beforehand.

At the heart of my reaction, though, is that I didn't really 'warm' to Nick. He made a lot of protestations about his innocence and gullibility, but somehow they never rang true. If he ever was that naive, the 'ask no questions, hear no lies' attitude of his workplace had definitely rubbed off on him long before he met Masha, and no matter how many times he claims to be sorry for what he did, I didn't feel he was - and that he'd do it again given the opportunity. An innocent led astray deserves a level of sympathy; a lawyer on the make doesn't.


I've seen a different take on this New Russia of money, muscle and hustle through the eyes of Martin Cruz Smith's Arkady Renko - in Tatiana and Stalin's Ghost - and I prefer his grimier, tackier world.