All We Shall Know by Donal Ryan 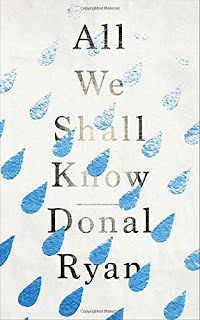 Melody Shee's life is a mess; she's thirty three, pregnant, alone, frightened, angry, and riddled with guilt.
The baby's father is Martin Toppy, a Traveller boy, barely more than half Melody's age. Her husband, Pat, has left in disgust and anger, knowing there's no way the child is his. And, at the back of Melody's mind, always haunting her, is the memory of the dreadful things she did to her best friend, Breedie, back in school. She's so desperate that taking her own life is beginning to seem a welcoming option.
Fortunately, a whim takes Melody to the Travellers' halting site, looking for Martin Toppy. He and his family have moved on but she makes an unlikely acquaintance, Mary Crothery, a nineteen year old Traveller woman with her own problems.
As her pregnancy advances week by week, Melody spills out her thoughts and regrets to her computer, and gradually comes to accept that maybe, after all, the birth of this child is a good thing, and that through it she can begin to forgive herself.

All We Shall Know is another absolutely stunning novel from Donal Ryan, but there's often a difficulty, in that when you've found an author whose work you love, it can be hard for them to surprise and amaze you. I was left, though, feeling equally moved by the story and amazed at Ryan's ability to tell it. Part of the magic of Ryan's story-telling, for me, is that he doesn't seem so much to 'create' characters as to give voice to ones who already exist fully-formed elsewhere, and what impressed me this time was his way of getting not only inside a woman's thoughts, but her physical feelings too - as if he'd experienced the draining emptiness of morning sickness, or a baby kicking and turning, for himself. I've read other novels written by a male author but told in the first person from a woman's point of view, and I've felt unconvinced by the masquerade; this time, I was utterly convinced - so much so that at times during my reading I was surprised to remember this story is written by a man!

Melody herself isn't a person to quickly take to - she's as outspoken, argumentative and downright stroppy as a teenager! - but as her story unfolded, I came to see her as a person damaged by her past misdeeds, and masking her vulnerability with anger, while caring deeply about her father and husband. The unravelling of Melody's story revolves around several threads - the difficulties that can at times surround something we take for granted; the birth of a child; the gradual wearing away of a loving marriage into a constant battle of recrimination; the way a community makes its own unwritten rules and how quick it is to judge anyone who doesn't conform; and how inflicting pain and suffering on others can bounce back on the giver.

In many ways, as in The Truth About December, this is a story about people living on the edges of society, shunned by family, friends or community for not behaving as expected; Melody is shunned by her neighbours for being pregnant; Mary by her own mother (!) for her inability to conceive, and then shaming her family by leaving her husband; the Travellers' community as a whole is looked on with suspicion and hatred just for being 'different'.

For anyone familiar with Ryan's work, there are places where his other stories seep through - a 'courting' couple in a car park at a beauty spot, or a policeman the reader's encountered before - which gives a feel of a whole world continuing its life in the background, just waiting for its story to be told.