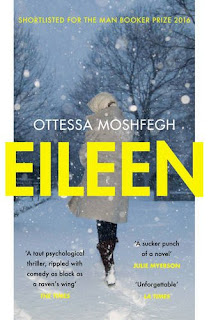 Eileen Dunlop lives a dull and dreary existence in a small town outside Boston. She dresses in her dead mother's clothes, has hardly any friends, works by day as a secretary at a boys' prison and, evenings and weekends, she looks after her alcoholic father, whose behaviour is becoming increasingly erratic and troublesome. She dreams of leaving and running away to the city but it doesn't seem likely that will happen.
Then, a new employee starts at the prison - Rebecca Saint John is glamorous and attractive, and everything dowdy Eileen would love to be. The two strike up an unlikely friendship but Rebecca's actions soon drag Eileen into more trouble than she could have imagined ...

Although this book is billed as a psychological thriller, I wouldn't personally describe it as such, as I didn't feel much tension or threat in the unfolding story line (but I've kept the tag). The story is told through the reminiscences of an elderly Eileen looking back on the events of the week leading up to Christmas 1964, so the reader knows early on that she has done something reprehensible which caused her to leave town in a hurry. There are plenty of hints about what it might be and the part that newcomer Rebecca plays in it but the actual act is kept secret till late, very late, in the novel, and nothing really remarkable happens before.

It's probably because of this lack of movement in the plot that I didn't like it, as the writing is good, and the atmosphere well conjured. I just didn't care about Eileen and her great secret. She certainly isn't a likeable character -  with her dreadful hygiene, morbid obsession with her deceased mother, and sexual hang-ups.

It's Booker shortlisted though, and I've seen good reviews on the web, so presumably someone liked it!

Other reviews - The Owl on the Bookshelf
Posted by maryom at 13:35