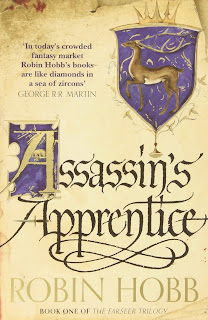 Fitz is the bastard son of king-in-waiting Prince Chivalry, brought up in the stables of his grandfather's keep, and for most of his childhood generally ignored by his royal family. But his mere existence has upset the line of succession, at a time when the kingdom of the Six Duchies is under threat from both inside (political machinations among King Shrewd's three sons) and outside (sea-raiders who leave their victims in  zombie-like state), and Fitz can't avoid getting embroiled in others' plotting and plans.

I picked this e-book up on a promotional offer a couple of years go, and have somehow never got round to reading it. Then last week I saw that the final tale in the whole Fitz and the Fool series will be published next year, and I decided it was time to take the plunge!
I loved the writing style, and Hobb had me interested in this poor child, unceremoniously dumped on his royal relatives, from page one. But ... fantasy series involving orphaned children have a tendency to follow a given path, however loosely and  at first, the story progresses much as I suppose you'd expect - Fitz is brought up by the kindly but stern stable-master, makes friends among the youngsters in the town, discovers he has a gift, the Wit, which enables him to bond with animals and share their thoughts, although the stable-master disapproves of such goings-on. Then, surprise surprise, the plot twists away from the familiar, moves things up a notch (or several) and turns into a story of royal power struggles, secret alliances and political machinations worthy of House of Cards' Frank Underwood, with all the twists and turns of a crime thriller.
I've read a lot of fantasy novels, and many rely on weird and wonderful creatures or magical abilities to further the plot; to have one moved along by very human desires and deceits is refreshing. I loved it, and can't wait to read the rest of the series - I think there's maybe 14 more to catch up on before the finale next May, so I my be some while ...

Review of the Liveships Trilogy