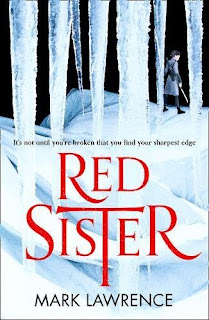 review by Maryom
When Nona is saved from the hangman by the Abbess of the Convent of Sweet Mercy it isn't through some pure-minded, altruistic concern for a wrongly-accused child, for Nona is far from innocent of the charges against her, and the Abbess is interested in the special 'talents' (an inborn aptitude for killing) that led Nona to this point, and the possibility that Nona may have a part to play in fulfilling a prophecy. Neither is the Convent the tranquil, contemplative place you might expect - the young girls who are admitted there are trained through martial arts, stealth, magic and poisons to become killers,and it's only through becoming one that Nona will be able to rid herself of the enemies she's created.

This is the first book I've read by Mark Lawrence but I saw folk enthusing about him on social media so, feeling in the mood for a little fantasy adventure, took a risk and really enjoyed it.

After the dramatic opening, the story slows somewhat as Nona becomes settled into her new life as a novice at the Convent. Yes, there are echoes of Harry Potter in the training for the various skills a novice must master, and there are similarities with the many other fantasy series centred on a special child who will rescue the princess/save the world/dispose of the bad guys, but the Convent of Sweet Mercy is a bloodier, more violent place than Hogwarts (Red Sister certainly isn't a story for children) and the story individual enough to stand up to other fantasy novels.

Red Sister is the first of a new series, The Book of the Ancestor, set on a world almost totally enveloped by ice; only a narrow corridor is habitable, this is warmed, not by the red sun, but by an artificial moon which reflects light down to heat the land at night. Civilisation seems to be at the vague medieval level of most fantasy novels but there are hints of a more technological past - for example, the different off-world 'tribes' that settled the planet, the 'ships heart' that provides heat for the convent and the circling artificial moon. Another aspect hinted at is the mysterious prophecy which Nona may or may not be in line to fulfil  - again it's a familiar fantasy trope but handled well and I liked the fact that there's a lot more doubt about which novice it refers to than in, say, Harry Potter or Eragon. The strange columns which guard the approach to the Convent, especially with Sister Thorn facing down her enemies there, reminded me of the fight scenes from The House of Flying Daggers set in bamboo groves, and so my whole imagining of setting and characters was tinged with this - it's probably not at all how the author envisaged it but one of the joys of fantasy is creating your own world out of the writer's words.
As the story builds to its dramatic close, there are more glimpses of the future which awaits Nona, with hints of invaders and war, and possible treachery among both the rulers of her world, and her friends. So although the first part of Nona's story has come to an end, I'm left wanting to read more...