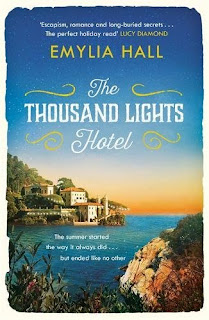 For thirty years, Kit's family has been tiny, made up of just her and her mother.  She was brought up never knowing her father's name, merely that he was a "not very nice" man, who died before she was born, and having no real idea why her mother chose to leave Italy for England. To press her mother for details always seemed to drag up such bad memories that Kit stopped asking. Then, as she lies dying in hospital, her mother admits the truth - Kit's father is still alive, and his name is Valentino Colosimo.
Weighed down by grief, Kit decides to go in search of the only relative she has - maybe to confront him with the anger her mother hoarded for all those years, maybe just to find some answers.

Tracking him down to the Hotel Mille Luci on Elba, Kit discovers a man nothing like her expectations. This Valentino is charming and kind, welcoming to all his guests, catering for their smallest needs, trying to anticipate every desire. Kit is taken aback - this surely can't be the man her mother despised so much? While she's trying to build up the courage to confront him, an added complication comes along in the shape of Oliviero, the hotel's chef, to whom Kit finds herself attracted before discovering he's presumably her half-brother!

The Thousand Lights Hotel is Emylia Hall's fourth novel, and another one I've completely loved. The story is one of a young woman searching for identity and a place to belong, of the complexities of personal relationships, the steadfastness of love, and the sometimes disastrous results of trying to do the right thing. There are misunderstandings, and twists and turns enough for a crime novel, on the way to Kit and Valentino finally unravelling what happened thirty years before.
BUT the extra somethings that bewitched me and made me fall completely in love with the book were, firstly, the atmospheric setting - a cliff-side garden filled with an abundance of flowers, herbs and shrubs, a terrace strung with twinkling lights, the sea as backdrop. It's not the same, but there's a lot that reminded me of the garden of San Salvatore in The Enchanted April  and the feeling that as near as is possible here's a little piece of paradise on earth. For the ladies visiting San Salvatore, though, Italian food is a mystery, something to be braved and endured, whereas Hall and her characters delight in it; which brings me to the second wonderful aspect of this book - the food!  From breakfast pastries, through biscuits of almonds and chocolate fresh from the oven, platters of antipasti with sunset-coloured aperitifs as the sun goes down, to dinners of pasta in all its shapes and tastes, with breads strewn with salt, rosemary and even strawberries, every morsel is a joy and I wanted to try it all! Hall's evocation of Hungarian food in The Book of Summers hooked me in the same way, and her love of these tastes, textures and flavours shines through; it's like watching Nigella enthuse as she whips up a little something in her studio kitchen.

The Thousand Lights Hotel is a perfect beach read, but not a book you'll casually throw away at the end of summer. It's one to treasure, savour it as you might the food, to read in winter when summer seems so far away, and dream of being at the Hotel Mille Luci.