The Forgotten and the Fantastical 4 - edited by Teika Bellamy 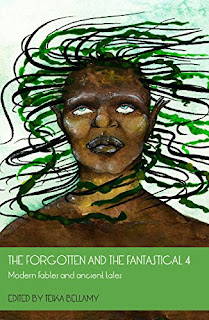 "Modern fables and ancient tales" is how this book, comprising fourteen weird and wonderful stories, describes itself, and, as with the previous volumes of The Forgotten and The Fantastical, this fourth collection takes fairy tales away from the nursery, and puts them back in their original place on the adult bookshelf. I don't know what it is about fairy tales - maybe that their themes seem universal, as fitting today as ever, maybe that in an increasingly urban, digital world we're seeking a connection with nature, or a simpler time when the world divided into good and evil - but something about them always appeals, and this latest anthology is no exception.


I've found there's often a strong feminist/earth mother streak in the work published by Mother's Milk, exploring the strength of female characters, their bonds with nature, and although this isn't a particularly 'themed' collection many revolve around a central female character, rather than the more traditional hero of folk tales. Several, in fact explore a similar concept - that of women breaking free from the demands and expectations of men, rejecting the 'safe' world created for them, often no more than a gilded cage, to find fulfillment and explore the world themselves.
In Belle/Bete by Renee Anderson, a badly burned woman is encouraged by her lover to shun the world, in order to avoid the taunts she might suffer there, but effectively locking her away from life.
Katy Jones' retelling of 'Snow White and Rose Red', A Beast of the Forest, follows the girls and the 'bear' beyond the traditional happy ending with the heroine choosing to embrace the natural world rather than the fake sophistication of the Court. In Lisa Fransson's The Moss Child a smith tries to keep his daughter 'protected' from the natural world of forest and birds which form her birthright, while Lynden Wade's Sins of the Fathers again features a smith, a man who seeks to avoid the mistakes made by his father and grandfather, and create himself a wife of iron. Rosemary Collins reinterprets Hans Christian Andersen's The Snow Queen into a fable about the perils of global warming, as Cold-Brained Kay (female in this version) goes on a quest to find cold and ice, and bring back winter. Elizabeth Hopkinson's Juanita draws on the life of a seventeenth century Mexican nun/scholar/poet who challenged the authority of bishops and philosophers (all male).

Some of the stories are set in traditional 'once upon a time' never-never land; Rachel Rivett's Wild Man, Holly James' Faraway Woman. Some set in recognisable historical times - A Story in Two Parts by Leslie Muzingo which centres on the lives of those 'creators' of fairy tales - Wilhelm and Jacob Grimm. Others bring magic and fairytale characters into contemporary settings - Ruth Asch's The Microwave is a modern equivalent of the magic never-empty purse, The Godmother's Fairy Tale Ending by Donna M Day takes place in a care home for the elderly, and Matthew Keeley's Winging In in a therapist's consulting room.

Susie Hennessey's Lowden House appears to be set in some bleak dystopian future (though in reality it's a place much closer to home), while in the world envisaged by Victoria Haslam in Strange Traits genetic modifications can turn you into almost any creature you'd like to be.

An eclectic, enjoyable collection for anyone who feels fairy stories are not only for the young and innocent.