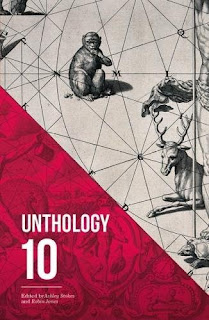 Unthology 10 is, once again, a carefully and cleverly collated mix of short stories through which a trail can be followed, a trail of change. In each story we see a character touched by an incident that changes them - mostly for the better. This Unthology is, like the nine before it, the sum of it's parts - and if you construct using only the best parts then the result has got to be something special and this, once again, excels. The crafting that went into each of these stories is excellent. Well done once again Unthank in finding the very best and putting together yet another brilliant Unthology anthology.

Highly recommended coffee time reading - except you may find one story is not enough.

In Rosa and Kelsey (by Kathryn Simmonds), Matthew had agreed to share childcare but he doesn't have 100% buy-in to the idea. A chance encounter in a park causes him to think again.

Ursa Minor (by K M Elkes) tells of Jack and Carrie, a young couple, who wish to start a family but things aren't happening when they have a chance encounter with a bear in the woods. Jack feels he needs to address the bear issue once and for all.

In One For The Ditch (by Brian Coughlan) a drunk encounters an alcoholic and, despite protestations of not knowing him, the reader is left to re-eveluate their relationship.

Blowhole (by Tom Vowler) is a letter from Susie, who finds herself in an abusive relationship but feels she must carry on despite her dreams of being a mother probably never coming to fruition.

In Cafeteria (by Jay Merill) a child's mother shows kindness to a woman, known to be a prostitute, and the child observes and learns from the encounter, trying to emulate all that is good.

Tenth Circle (by Liam Hogan) deviates from the theme and shows how, even though centuries may pass, certain attitudes and beliefs remain unchanged. And it laces the tail with humour. Nice one!

When Nature Calls (by Gareth E Rees) also has a sad smile to it but a lesson is learned that defying nature is rarely successful.

The Best Way to Kill a Butterfly (by Hannah Stevens) brings out the worst in people and we learn a little of why Michael left.

Confessions of an Irresolute Ethnic Writer (by Elaine Chiew) sees the writer have a brush with mythology... or does he?

Household Gods (by Tracy Fells) tells the story of a mans loves for his mother and the wife it was arranged he should marry. But does he love his wife?

A Moment Could Last Them Forever (by Daniel Carpenter) tells of a sort of medium who gets invested rather more than usual in a case - a case she believes she's failing in.

Take Away the Sky (by Mark Mayes) sees a man, alone, set to take his own life when he has an epiphany and takes comfort from a phone number he will never use.

In Livestock (by Valerie O'Riordan) a vet's daughter sees herself in a young girl who is seemingly running away and wonders why she felt so different.

End Times (by Maxim Loskutoff) tells of a woman who struggles to come to terms with the fact that her injured dog won't live, while her husband has already given up.