Once Upon a River by Diane Setterfield 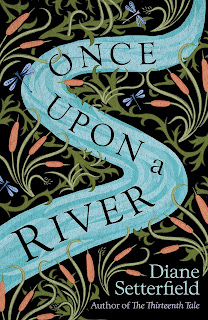 In the Swan Inn on the banks of the Thames at Radcot, regulars are whiling away the long dark winter's night telling stories when in walks a stranger with the drowned body of a child in his arms. He's battered and bruised, and at first the child appears dead. Who is he? Is the girl his daughter?  where did she come from? the storytellers are quickly at work spinning a new tale from the night's extraordinary events ... then to everyone's amazement the child begins to stir ...


Once Upon a River is a marvelous flowing tale, deep and full as the Thames itself, with a story which whirls away into eddies and backwaters, then rushes forward with the full force of the current.

At its heart lies the mystery of the girl's identity, and a potential tug of love over which family she'll stay with. The Vaughans' young daughter, kidnapped two years ago, has never been traced. Could she have somehow miraculously returned? On the other hand, the Armstrongs have just discovered that their eldest wayward son not only has has a daughter, but has left her, and her mother, in poverty. She's gone missing from her last known home, so could this rescued child be her?

It's also a story about stories, and about how we tell them to make sense of the mysteries and inconsistencies of life. For the Swan's regulars anything that happens must be shaped, given structure, a proper beginning, middle and end, and its heroes and villains identified; the story of a dead girl coming back to life is both a blessing - such an amazing tale to tell - and a difficulty - for who can tell how it will end? As the river hides currents and treacherous weeds beneath its smooth surface, there's more to any of these stories than at first apparent. I loved the way these untrained story-tellers sat around and discussed how a story would best progress, helping each other hone their tales for the better enjoyment of all.

Once Upon a River is an astounding piece of storycraft. Its various threads twisting round each other, as the reader is swept along by its current. It will definitely be heading straight for my 'best of ...' lists, but here's a problem. Which year does it belong in? It's published in the US and Canada, and as an e-book on 4th December 2018, but UK hardback publication is not till 17th January 2019. Maybe it can somehow sneak into both years' lists.