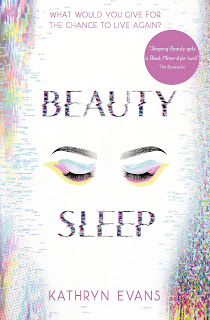 
Like a real life sleeping beauty, Laura has been sleeping for forty years. She and her little brother Alfie were seriously ill and cryotherapy, suspending them in a deep-freeze-like state, was seen as the only way they could survive. Now a cure has been found for her illness, and it's time to wake up.

For a 1980s girl, 2028 is a shock. For one thing, she's a celebrity  -  everyone knows of her ground-breaking treatment, they want to see her, talk to her, copy her '80s fashion - and the world has changed so much -  tiny computers, cashless payments, data imprints, and everyone's flawless complexion and brilliantly perfect teeth.
Befriended by Miss Lilly, the owner of the clinic which pioneered her treatment, Laura soon has a new life - new school, new friends - but nothing can replace her family or her old friend Stacey.
There's another side though to this bright future in which Laura finds herself. Children are living rough on the streets, homeless people being classed as vagrants and taken away - but to where? Shem and his dog are trying to stay one move ahead of those tracking them down, but his sinister pursuers aren't so easily shaken. When his story and Laura's collide, an unthinkable, horrific crime is exposed.

Kathryn Evans' debut novel More Of Me was a real knock-out of a read, and with Beauty Sleep she's done it again, mixing the personal problems of a teenager coming back to life after 40 years of 'sleep' with unscrupulous science that belongs in a horror film.
The story is fast-paced and compelling. I read the sample first chapter (here on the Usborne website) and knew I HAD to read the rest. Laura's confusion and lack of memory grabbed my sympathy and intrigued me, at the same time. As her past story is slowly revealed, I couldn't help but wonder how much was being withheld or distorted by people who claimed to care for her. Which of the conflicting versions of events should Laura (and the reader) believe?
Her story intertwines with Seth's, and it's hard to see how the two will join. Laura's new life is a privileged one of a luxurious apartment, servants, and private school. Seth's is one of living hand-to-mouth, and having no permanent home. Society doesn't seem to have become any fairer in the next decade!
A truly imaginative thriller for teens/young adults, though maybe some will find some 'medical' aspects somewhat horrific - the true horror of it though is that perhaps it isn't ALL that far-fetched!