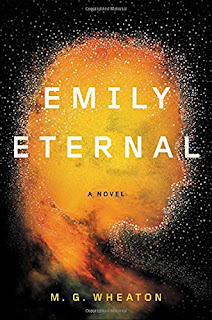 Emily is an artificial consciousness, designed in a lab to help humans process trauma, which is particularly helpful when the sun begins to die 5 billion years before scientists agreed it was supposed to.
So, her beloved human race is screwed, and so is Emily. That is, until she finds a potential answer buried deep in the human genome. But before her solution can be tested, her lab is brutally attacked, and Emily is forced to go on the run with two human companions - college student Jason and small-town Sheriff, Mayra.
As the sun's death draws near, Emily and her friends must race against time to save humanity. But before long it becomes clear that it's not only the species at stake, but also that which makes us most human.


As you can see from the publicist's blurb above, I'm continuing with my apocalyptic streak, but with a slight difference  - this time the story is set pre-apocalypse, because when the Sun dies there'll be no humans left to tell stories.
There are two sides to Emily Eternal; there's a gripping, action-packed race to save humanity from the dying sun, but, just as much, it's about what kind of society will survive, and what constitutes 'humanity'. How far can a person change and still be considered human? how far would you be prepared to sacrifice free-will to survive? Unfortunately, it's not something to debate further here as I'd have to give away too many plot spoilers.

It took a while to come to grips with the slightly weird way 'Emily' works - making her sometimes visible to one person, sometimes to many - but overall I enjoyed the book.
There were a few bugs and loopholes that plagued me at times - the most niggling being the lack of panic shown by the general public. The end of the world is coming, people know about it, but everyone seems to be taking it amazingly calmly - none of the street-rioting, suicide cults, etc that you might expect and which appear in other end-of-the-world novels and films. It possible that in part this could be explained away by the fact that Emily 'lives' in the restricted environment of a university campus and news of the outside world is kept from her, but even the academics surrounding her seemed unperturbed by the thought of mass extinction.
It's good to see a 'computer' working on humanity's side for once. Emily isn't 2001's HAL, or the Terminator series' mankind-destroying machines; rest assured she has our welfare at heart.