The Stolen Spear by Saviour Pirotta 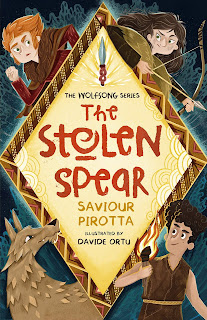 Wolf is a little bit of a misfit. He's no good at fishing. He's easily upset by the sight of blood, so will never make a hunter. He gets distracted or daydreams, and doesn't protect his family's sheep. One thing he's good at is climbing cliffs to collect eggs from the nesting auks - but even there he's trapped by the tide and has to be rescued by a stranger, a girl from a neighbouring island. The girl, named Crow, is welcomed by his family, but, after she has returned to her home, a sacred spear belonging to a dead shaman goes missing, and Crow is the only suspect. Wolf is blamed for bringing her to the village, and he vows to recover the spear, even though it means making a perilous journey to the other islands.

The Stolen Spear is a thrilling adventure story for children aged 7 and over. Set on the Orkney Islands at the end of the Neolithic period, in the world famous (now ruined) village of Skara Brae, it brings both the remoteness of the islands, and the way of life of its Stone Age inhabitants vividly to life. I always feel that historical fiction makes the past more accessible; lets us understand that people long ago were no different to us (an especially important point for younger readers). Wolf may be a Stone Age boy, but his problems of fitting in, of being bullied, of trying to prove his worth to his father, are all themes that young modern readers will relate to. Wolf's story is told in the first person from his point of view, letting the reader share Wolf's frustrations and fears, while at the same time he seamlessly explains aspects of his life which are undoubtedly strange to us today.

The story moves along quickly, with tense moments as Wolf  faces danger at sea and from the people he encounters on the other islands, but he also forges new friendships along the way, and ultimately finds his special role in life.


While primarily an adventure story, The Stolen Spear ties in nicely with KS2 history on the late Neolithic period. There are discussion points at the back to encourage readers to think more about certain aspects of the story - concepts such as change or courage, or why people have different opinions and points of view - and of course the Neolithic period itself.