He Wants by Alison Moore 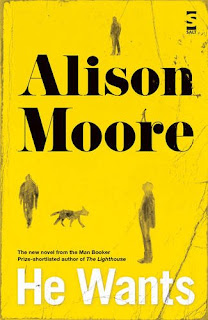 A while ago - a long while, actually - at the launch for Alison Moore's novel Missing, I picked up a copy of one of her previous books, put it on a shelf, and half forgot about it. I have quite a stack of my own personal books which tend to get neglected in favour of review copies, but this last month or so I've been trying to take time out to read them. So here I am, over a year later, to tell you about He Wants.

Lewis is a retired school teacher. He's had an uneventful life, and retirement is even less exciting. Now a widower, he still lives in the village where he grew up. His daughter visits regularly, bringing lunch that he doesn't really want, and making sure he's okay, but there seems to be little love or companionship between the two. This isn't the middle-age he wanted, in fact much of his life he seems to have just drifted along the easiest path rather than make active choices. With time on his hands, Lewis wanders through his memories, regretting chances he never took, wishing he'd done things differently. He's made to feel worse by the return of an old friend, Sydney, who seems quite glamorous in comparison - he's traveled and seen the world, and seems to have generally made a success of his life.

As with Alison Moore's other work, this is a gently-paced, quiet, contemplative story, focusing on the inner turmoil and hopes of her characters.

I read this at a point when I was feeling very low, and although, with its themes of loneliness, regret and missed chances, it's hardly what you might call a cheerful book, I found it soothing. It's not all doom and gloom though. There are many instances of Moore's wry humour, and the ultimate message is one of hopefulness. To me it said 'it's never too late; if you've got an unfulfilled dream, give it a go'