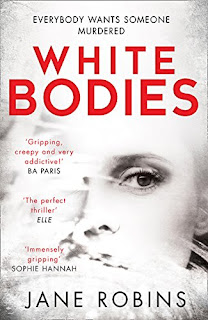 "Callie loves Tilda. She’s her sister, after all. And she’s beautiful and successful.
Tilda loves Felix. He’s her husband. Successful and charismatic, he is also controlling, suspicious and, possibly, dangerous. Still, Tilda loves Felix.
And Callie loves Tilda. Very, very much.
So she’s determined to save her. But the cost could destroy them all…
Sometimes we love too much."

Tilda and Callie are twins - but possibly as un-alike as could be. Tilda has always been attractive, outgoing, admired; at 27, she's a well-known actress, able to pick and choose her roles. Callie has remained in her shadow - quiet, reclusive, and dowdy, she works in a bookstore. Despite their differences the two have always been close, but now Tilda has a new boyfriend, Felix, of whom Callie doesn't approve. She feels Tilda is being dominated by him too much, letting him decide too many things for her. She even thinks he might be violent, and is determined to do everything possible to save her besotted sister. Tilda meanwhile is determined to marry him.

As the book opens Felix is found dead in a hotel bedroom. As with any unexpected death how? and why? are the obvious questions, and the story takes us back through the preceding months as Callie's mistrust of him builds, and then forward to the aftermath of Felix's death.

Like most psychological thrillers, it strings you along by only revealing the truth in installments. The story is told from Callie's point of view, so we see her quick distrust of Felix, and the bizarre actions she takes in her attempt to separate him and Tilda, but aren't privy to the thoughts of any other characters. It's definitely a page-turner - I wanted to speed through it non-stop to uncover the ending - but I'm not sure it's one for me.

Unlike most of my 'review' reads, this isn't a newly published book. It's been sitting on a TBR pile for a couple of years because I didn't feel in the mood for the tension and drama of a psychological thriller. If you're a lover of this genre, and somehow missed this on publication, go and check it out; for me, although I found it a hard book to put down, I'm still not in the right head-space for it.
Posted by maryom at 19:38