The Girl with the Louding Voice by Abi Daré 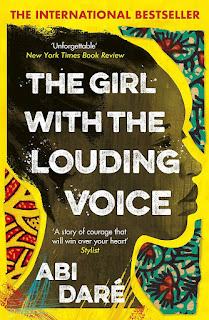 "I don't just want to be having any kind voice . . .I want a louding voice.At fourteen, Adunni dreams of getting an education and giving her family a more comfortable home in her small Nigerian village. Instead, Adunni's father sells her off to become the third wife of an old man. When tragedy strikes in her new home, Adunni flees to the wealthy enclaves of Lagos, where she becomes a house-girl to the cruel Big Madam, and prey to Big Madam's husband. But despite her situation continuously going from bad to worse, Adunni refuses to let herself be silenced. And one day, someone hears her."

The Girl With The Louding Voice is a coming of age story set in Nigeria; the story of fifteen year old Adunni, told in her own words, moving from the poverty of a rural village to a different sort of poverty among the affluent classes of the city, where workers are treated almost as slaves.

In many ways it's a disturbing tale, spotlighting the treatment of girls and women as commodities to be traded, in a society where men are of primary importance, and which is drastically divided between rich and poor. First Adunni is effectively sold to a much older man, already married with two wives, when her father can't pay his debts, then she goes to work for a woman in the city but all her wages go to the 'agent', the man who placed Adunni in her job, and her employer's husband feels any of the female servants should be amenable to his sexual advances.

On the other hand, it's a story of hope, and it's hope that stays with the reader as the overall feel of the book. Whatever her situation, Adunni's resilience and determination shine through. She's adamant that somehow she'll find a way to finish her education, and be able to speak out, in her louding voice, on behalf of girls and women trapped as she is.

It's an amazing debut, told in an original, captivating voice, with Adunni finding humour and compassion in life despite her predicaments. I found myself rather regretting that her attempts to improve her English, seen as the key to bettering her prospects, would result in a watering down of Adunni's lively manners of speech.