Audrey Orr and the Robot Rage by Jenny Moore 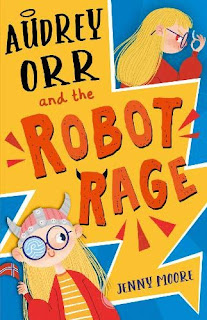 Audrey's mum has won an all expenses paid cruise to Norway, but there's one snag. The holiday has to be taken during term-time, and Audrey's headmaster, Mr Stickler, doesn't allow ANYONE to take holidays during the school year, no matter how educational Audrey's mother says it will be. Granddad though has a clever plan. In the back of his favourite knitting magazine he's spotted an advert for lifelike robots. Maybe one could take Audrey's place at school while she joins her mum and dad on the cruise?

The robot though soon develops thoughts of her own, and Audrey's plan starts to fall apart.

It's a tempting idea, isn't it? Get a robot twin to do the boring stuff - go to school, do your homework, and anything else you don't want to do. If you're thinking it sounds cool, give this book a read. As Audrey finds out, there could be a downside. Instead of being the answer to her problems, having a robot twin turns out to be the start of them.

Audrey Orr and the Robot Rage is an excellent read - full of fast-paced mishaps and adventure, and lots of laughs. It's aimed at mid-grade, 9 to 12 year old readers, though it's a fun read to share with a younger child. Whichever, they'll be gripped by the quirky twists of the plot as Audrey tried to outwit her evil twin, and prove to her parents that SHE is the real Audrey.