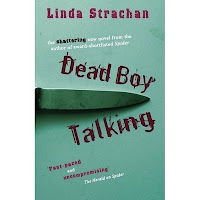 As life slips away
Reviewed by Maryom
There seems to be a rush of books on knife crime at the moment presumably due to its news topicality. This one brings a story from a different angle - that of a teenage boy, Josh, stabbed and possibly, presumably, bleeding to death. The story of a teenage boy who carried a knife with him 'just in case'. As he lies there, he thinks back over the events that have led him here - 'Was it only yesterday morning when everything started to go wrong?' - not really, as things have been moving towards this point, with a dreadful feeling of inevitability, for months if not years.
I was totally hooked from the very first sentence - "In 25 minutes I will be dead" - but it must have one of the most stunning, shocking opening pages of any book I've read with an amazingly powerful scene as Josh lies there in the alley, not really believing what has happened to him, watching blood pumping out counting down the minutes he has left to live. I could almost FEEL the knife as it slid in and his incredulity that THIS had happened TO HIM.
The book alternates between Josh in the here and now and the events leading to this point as seen by him and others. Listening in on Josh's thoughts is incredibly poignant as he thinks of the plans he had had for the future, of turning his life around, maybe going to art college. Josh realises that his friends have problems too with which they've coped far better than he has. He is at times a rather shallow, self-centred and even self-pitying teenage boy but perhaps a more realistic character for it. A book that will definitely make you stop and think.
Maryom's review - 4.5 stars
Publisher Strident Publishing
Genre - Teenage
Posted by maryom at 09:31