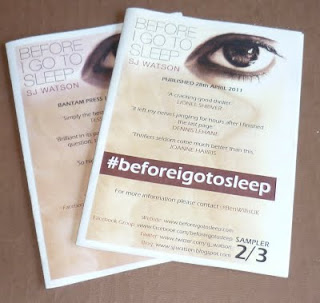 Before I Go To Sleep by SJ Watson

Usually I only blog about books I've read but I thought I'd give a mention to these 'tasters' I've received.
They're for a novel out later this month - Before I Go To Sleep by SJ Watson - and presumably are parts of the first chapter. Christine wakes one morning in what she believes to be a stranger's bed, but it isn't. She is at home, in her own bed, the man beside her is her husband Ben but she remembers none of it. She, and the reader, slowly realise that she has no memory of the last 18 years.
If you've seen 50 First Dates you'll understand the scenario - everything up to an accident is remembered, everything since it totally forgotten. Husband Ben has a scrapbook full of photographs and memorabilia to help fill the long gap, but something doesn't feel quite right. Mid-morning, while Ben is at work, a man phones claiming to be a doctor helping Christine regain some of her memory but, for some reason, this is being kept secret from her husband.
This book is published 28th April and I, for one, NEED to track it down and read it!
Posted by maryom at 16:52