We by Yevgeny Zamyatin 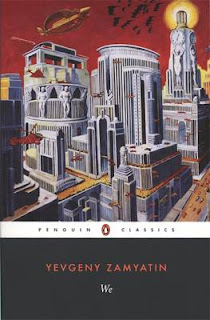 Truly Remarkable
Review by The Mole

Onestate is a city made entirely from glass and enclosed by a wall of glass to keep out the chaos of the wild planet. Arising after 200 years of war, the totalitarian state citizens have no crime, no passion and only one 'right', that of punishment. A place where duty and regimented routine come first is a 'happy' place where freedom and liberty are seen as criminal activities. Each citizen is a Number and the individual has no importance. A place where when carelessness causes death then work goes on uninterrupted and people laugh at stupidity of the accident.

D-503 is a model citizen except he is an exceptional mathematician and the builder of the INTEGRAL - a space ship that is to go out and force Onestate's will and control over the other civilisations of the universe. Model citizen that is until he meets I-330 and falls madly in love with her. Madly enough to jeopardize his sanity and his model behaviour as he submits to I-330's will.

As a citizen of Onestate D-503's life was reliable and predictable but now it is deteriorating and as the story is written in the first person, as a series of notes to go with INTEGRAL to tell the newly controlled planets about Onestate, we see and feel the chaos set in. This is done in a way that involves the reader and frustrates them as well when we come across unexplained statements as random thoughts and actions creep in.

This book was written in 1920-21 and was translated from the original Russian by Clarence Brown. Originally banned in Russia it was finally published there in 1988.

As an early Sci-Fi story this has set the mould and the model for many stories that followed in some cases as close as a few years later and in other cases stories, films and TV series are still using the ideas. One thing that tends to change though is authors today seem to have the subjects of such states believing themselves to free rather than seeing freedom as undesirable. In my teens I read "The Dome" by an author of the name Jones and this introduced me to Sci-Fi and as such influenced a lot of my reading, but I now find that it is very close to the plot of We in many ways. Although, since reading The Dome, I classify myself as a Sci-Fi reader, I have never read Brave New World or 1984 and this is something I must now address as people draw parallels there too.

This was an extremely good and impressive read it has got to be a must for sci-fi enthusiasts everywhere. In fact even if you are only mildly interested in sci-fi then consider it a must.