Before I Go To Sleep by SJ Watson 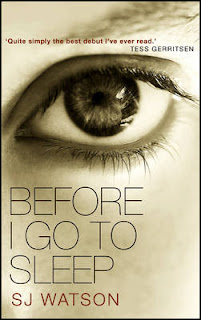 A Clean Slate
review by Maryom

Christine wakes one morning in what she believes to be a stranger's bed, but it isn't. She is at home, in her own bed, the man beside her says he is her husband Ben and that they've been happily married for many years. Christine remembers none of it - absolutely nothing after an accident 18 years ago, every night her memory is wiped clean and each day started with a blank slate. Husband Ben has a scrapbook full of photographs and memorabilia to help fill the long gap, but something doesn't feel quite right. When Christine discovers a diary, kept secretly without her husband's knowledge, recording the events of the past few weeks and the flashes of memory that have occurred, she becomes more certain that somewhere, somehow, Ben is hiding the truth.

I'd had 'tasters' of the first chapter arriving over several weeks and was frustrated at not being able to read more, so when the actual book turned up for review I lost no time in sitting down and getting on with it. Before I Go To Sleep definitely lives up to the hype going round the web about it. SJ Watson has captured how absolutely terrifying it must be to have no memory of so many years, to have no way of being certain that people are telling you the truth. Through the diary, the reader shares Christine's dilemma of wanting to accept the things Ben tells her, of wanting to believe his reasons for not sharing everything, everyday, when it will all have to be repeated the next, but finding that what he says doesn't match her intermittent memories or the diary she's started to keep.
The gradual unfolding of Christine's life makes for a tense, atmospheric thriller that drags you in and compels you to read. I was very tempted to quickly peep at the ending but just managed to resist and was glad I did!

Other reviews; Subtle Melodrama
Words and Peace
Posted by maryom at 20:22