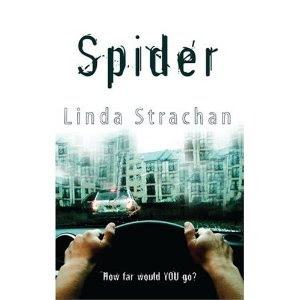 Spider has decided it's time to stop joy-riding. If he's caught again, he'll be sent down. Unfortunately, he can't resist the chance to show off to his girlfriend, Deanna. Just one last time won't do any harm he thinks....
The story is told firstly from Spider's point of view but then from that of the other occupants of the car - Deanna and his mates. It follows them racing round the streets and through the horrifying aftermath.
I read the first chapter of Spider in a taster booklet given to me by Linda Strachan. What hooked me was the opening sequence of speeding through streets, I was amazed how well the author captured that feeling of driving too fast, beyond control, knowing how dangerous it is and not wanting to slow down. It got me inside Spider's mind - I could feel what compelled him to do this - and why he didn't want to give it up. The rest of the book is equally gripping, though for different reasons, as Spider and his friends try to come to terms with the consequences of such reckless fun. I don't really want to say too much in case I give away the plot but any teenager with a need for speed should be MADE to read this - maybe it would help them see the dangers in a way that all the moralizing in the world cannot. With that in mind I was rather disappointed to see that our county library service only had one copy and that I was the first person to borrow it.

Yes, Spider is a story with a moral - but it's still a gripping, readable and rather frightening novel.

from Amazon
Posted by maryom at 19:26